← This day in baseball: Double play trouble
Quote of the day →

Apparently, this is a thing!  It’s fascinating, sometimes, the things we learn first thing in the morning.

Not only do we celebrate the Sultan of Swat, today, it is also National Take Our Daughters and Sons to Work Day, National Tell A Story Day, and National Prime Rib Day (I’m sure the Babe would have been thrilled to know that he shares a holiday with such a delicious dish).  It would have been fun to post a picture of Ruth eating prime rib, but it seems I will instead have to settle for telling a Babe Ruth story:

Ruth, it turns out, was quite the reckless driver — which I suppose isn’t that much of a surprise when one considers the man’s temperament.  Granted, in the 1920s, speed limits were nothing compared to what they are today, and the Babe managed to cull an impressive collection of speeding tickets, traffic violations, and automobile accidents.

Then, on June 8, 1921, Ruth was arrested in Manhattan for speeding (traveling at a whooping 26 miles per hour).  It was his second arrest in a month, and he was sentenced to spend the rest of the day in jail in addition to a $100 fine.  From his cell, Ruth requested his uniform and dressed for that day’s game.  He was released 45 minutes after the game had started and sped off with an escort to join the rest of the Yankees. 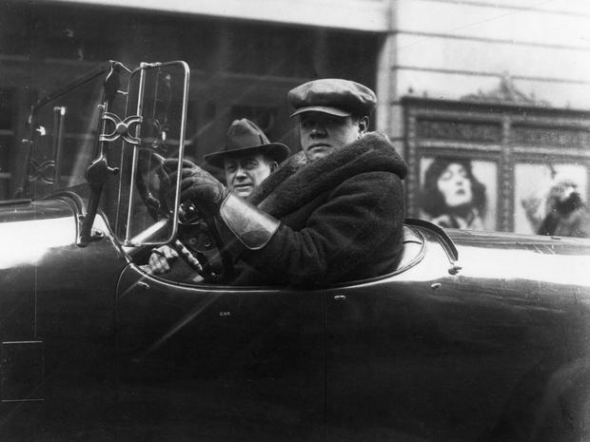