← A brief history of cleats
This day in baseball: The first Scot →

Portrait of a catcher 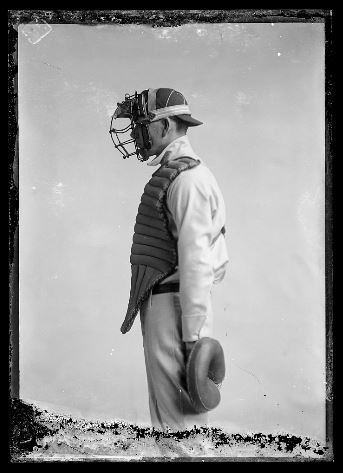 This photograph from the collections of the Library of Congress looks simple enough, but it prompts a lot of questions for me.  It is noted that the photo was taken between 1873 and 1916.  Given that the catcher’s mask wasn’t invented until 1876 and it wasn’t until a few years later that their use became common among backstops, we can eliminate the first few years of that range.  The mitt, meanwhile, resembles the one patented by J.F. Draper in 1899, so I think it is safe to say this photo is likely from the early 20th century.

My questions, however, involve the player himself:  Who is he?  Where is he from?  What team does he play for?  Is he really a baseball player, or merely a man off the street the photographer convinced to put on some equipment for a photo op?

And if he really is a ballplayer, what is he thinking?  He appears to be standing behind home plate, looking out at the field before him.  Is he deciding on what pitch to ask for next?  Is he unhappy with how the defense is arranged?  Or is he upset because that damned umpire called the last pitch a ball when it was clearly over the outside corner?

Its listing in the Library of Congress catalog doesn’t answer any of those questions, unfortunately.  I guess I’ll just have to continue to study the photo and wonder.