On September 30, 1893, Browns’ second baseman Joe Quinn was honored by The Sporting News as the most popular baseball player in America. That same day, in a doubleheader against the Beaneaters, Quinn collected eight hits, becoming the first player in history to accomplish the feat. The Browns won both games of the doubleheader, 17-6 and 16-4. Quinn, who worked as a mortician during the off season, was inducted into the Australian Baseball Hall of Fame in 2013.

Considering his reputation for an inflated ego, referring to himself in the third person and the like, Rickey Henderson’s Hall of Fame induction speech is pleasantly humble.  He seems genuinely appreciative of the opportunity to join the big names in Cooperstown.

I stumbled across this image last night of an application submitted in 1903, and apparently approved in 1904, for a patent on a Base Ball Catcher.  This contraption appears to have been intended to replace the need for a catcher’s mitt, featuring a square cage mounted to the front of the catcher’s chest protector.  I haven’t been able to find much information about this device beyond the drawing, but it appears that the mounted box features two inward-swinging gates (labeled #5 and #6 in the drawing) to allow the ball to enter the box and then get trapped inside.  The ball could then be released via the tube below (#10). 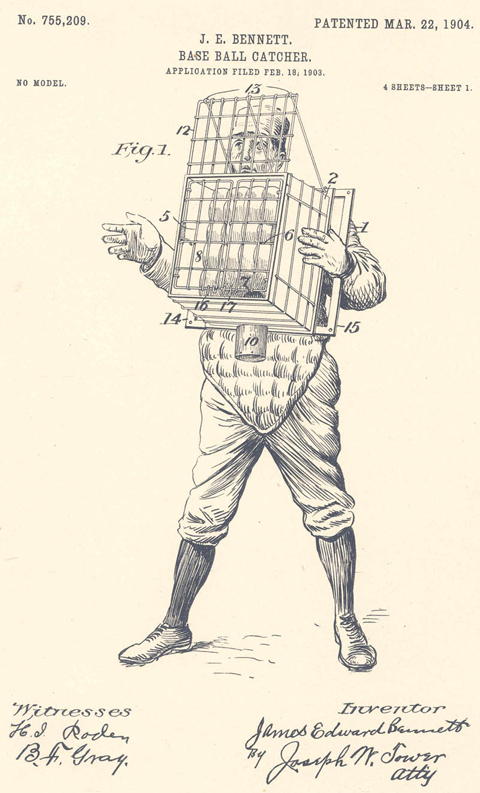 An internet search for “James Edward Barnett,” who appears to have been the inventor of this strange piece of equipment, did not yield any further information.  I would be curious to learn what Mr. Barnett thought about the practicality of this contraption.  Catching high popped foul balls, for example, would prove rather difficult with this, as would throwing out potential base stealers or picking off runners.  I suppose a positive would be that, if the catcher is required to always set up the same way, it could potentially remove some uncertainty about the strike zone.  On the other hand, wild pitches and passed balls would become quite a nuisance.  Furthermore, wearing this thing does not appear very comfortable and, frankly, I’m not sure I would be willing to take a Randy Johnson fastball directly to the chest, no matter how much padding this gadget promises to provide.

The first pinch hit grand slam in American League history was hit by Marty Kavanaugh on September 24, 1916.  The second baseman’s historic smash wound up being the difference in the game as the Cleveland Indians defeated the Boston Red Sox, 5-3, in Cleveland.

Happy Friday!  Here’s a wonderful Peanuts strip that might give you a chuckle this morning.  Based on this, it seems I was using Ken Griffey, Jr.’s glove as a kid.  Too bad I don’t still have it; I could’ve sent it back to him.

Baseball endures at least in part because it is a contemplative sport that delights in nuances. Not a brazen game, eager to sell its thrills cheaply, but rather an understated affair that must be courted if it’s to be loved.

Mickey Mantle is one of those players that everybody wants to love, and yet is becomes so hard to look past his lifestyle and how it affected his on-field performance.  This piece does a great job of capturing that sense, where, as a reader, you really want to feel sympathy for Mantle, but you can’t quite let the other stuff go.

This poem was published in Spitball magazine in October 2014.

Leaving Oklahoma, Mantle
Corn fed and country handsome,
Listened to his daddy and
After he died young, carried
On conversations with him
In the Yankee center field.
Mickey looked up at what stars
He could see, and there was Mutt
Telling him to move in some,
To always hit the cutoff,
But when the game was over,
Mick was all alone with his
Mates, the women, the party,
Walking Manhattan sidewalks,
The latest girlfriend on
His arm, as he drunkenly scanned
The empty meaningless sky.

This day in baseball: Munson’s plaque

On September 20, 1980, a bronze plaque was dedicated to Thurman Munson at Yankee Stadium.  Munson had passed away the previous year attempting to land his Cessna Citation at Akron-Canton Airport.

Baseball during World War I

World War I broke out in late-July 1914, following the assassination of the Archduke of Austria-Hungary, though it was not until April 1917 that the United States officially entered the war.  America had remained neutral in the conflict, at least until German U-boats began to strike at ships with Americans passengers on them.  In retaliation, the United States declared war on Germany mere days before the start of the 1917 baseball season.

As the war raged on, Major League Baseball proceeded with its full schedule, in spite of the fact that most minor leagues shut down for the season.  Very few professional players joined the military at first, either through the draft or through voluntary enlistment.  This, unsurprisingly, did not sit too well with the American public.  Even as owners donated money to the war cause and gathered up baseball gear for soldier recreation, the public demanded greater sacrifices from organized baseball.  In response, owners cut down on team travel, reduced the 1918 schedule from 154 games to 140, and trimmed player salaries.  When the criticism continued, owners answered with the insistence that baseball played a role as the national pastime.  Its contribution to the war effort, they claimed, was in its ability to keep American spirits high.

Early in the 1918 season, however, Secretary of War Newton D. Baker determined that being a baseball player was a non-essential occupation to the war effort.  Furthermore, all draft-eligible men employed in “non-essential” occupations were required to apply for work directly related to the war or take a chance on being called into military service.  Baseball owners managed to delay the “work or fight” requirement until the end of the season on September 1st, and continued fighting in order to gain a longer reprieve for World Series participants.  In spite of its misgivings, the government relented.

Nevertheless, an average of fifteen players per team found themselves drafted or chose to

enlist prior to the deadline.  All teams, as a result, sought out replacements, who were often younger, less experienced, and less talented.  As the quality of play deteriorated, so did fan attendance in stadiums.  The 1918 World Series ended up being a match up between the Boston Red Sox and the Chicago Cubs.  It remains the only World Series to be played entirely in September (running from the 5th to the 11th), due to the premature end of the regular season, and a number of players threatened to strike due to low attendance.

Game 1 of the 1918 World Series became the first time “The Star-Spangled Banner” was performed at a Major League game.  Thanks to the war effort, no doubt, baseball seemed eager to continue to prove its patriotic contribution to the cause.  (“The Star-Spangled Banner” would become the national anthem in 1931.)  The Red Sox went on to win the Series, four games to two, led by a young pitcher by the name of Babe Ruth.

Meanwhile, in Europe, players who found themselves participating in the war had a not-so-enjoyable experience.  Grover Alexander, considered to be one of the top pitchers of the time period, suffered from loss of hearing, shell shock, and would later develop epilepsy.  He would later be driven to alcohol abuse, as a result of his experiences during the war.  Ty Cobb and Christy Mathewson were part of a gas defense drill that turned out very badly when a number of soldiers missed the signal to put their gas masks in place.   Ty Cobb managed to escape unharmed, but Mathewson inhaled a considerable amount of poison gas. His health deteriorated over time, and Mathewson died of tuberculosis seven years later.  Also among those sent to Europe were George Sisler and Branch Rickey.  In total, an estimated two hundred and fifty ballplayers ended up serving in the military, while others joined the reserves or found war-related work.

If the war continued into 1919, rumor had it, owners would be forced to cancel the 1919 season altogether.  Fortunately for baseball, however, Germany formally surrendered on November 11, 1918, thus ending the First World War.

It seemed like it was back to business as usual for baseball.  However, the 1919 season would prove in phenomenal fashion that this was hardly the case.  While baseball managed to continue limping along during the war, the racetracks had been forced to shut down entirely.  As a result, gambling in baseball skyrocketed.  This, combined with the efforts of owners to recoup loss funds as a result of the war, would set off a domino effect that resulted in a metaphorical explosion by the end of 1919.