This got a chuckle out of me. Dry contacts, man, they really do mess with your vision. 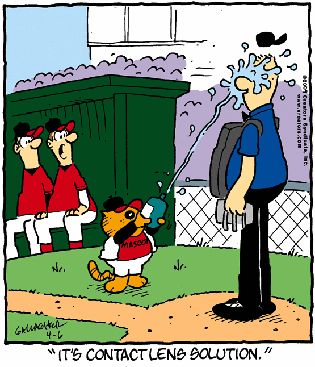 To all my readers in the U.S., I hope you have a great and relaxing holiday!

Joe Mauer was named Most Valuable Player for the American League on November 23, 2009. In spite of missing the first month of the season with a back injury, Mauer received 27 of 28 first place votes from the BBWAA to become the fifth Twin in history to earn MVP honors.

When the Houston Astros made it to the World Series in 2019, NASA astronauts on the International Space Station celebrated the game with their own game of baseball. Unsurprisingly, playing baseball in outer space looks a little different than it does here on Earth.

The astronauts were rooting, of course, for the Astros in that year’s Series. Unfortunately for the crew of the ISS, the Washington Nationals came out victorious in 2019.

This 17,500 mph fastball found its way to the @Space_Station cupola. We hope all are enjoying watching the #WorldSeries action back on Earth! pic.twitter.com/5EUq4OLKb6

This day in baseball: The Alleghenys jump to the National League

The Pittsburgh Alleghenys left the American Association on November 18, 1886 to join the National League as an expansion team. In 1891, the Pittsburgh team would become known as the Pirates, a name derived from an incident involving the franchise accused of being “piratical” for taking players from rival teams in other leagues.

In baseball, you don’t know nothing.

Talk about a high-scoring game. And using an entire tree trunk as a baseball bat has Mark McGwire steroid vibes all over it.

Looney Tunes was a staple piece of entertainment in my childhood. Enjoy this bit of lighthearted cartoon baseball!

This day in baseball: Waitkus is Comeback Player of the Year

Seventeen months after being shot in the chest with a rifle by an obsessed fan, Eddie Waitkus was named the Comeback Player of the Year by the Associated Press on November 10, 1950. The Phillies’ infielder hit .284 that season and led the team with 102 runs scored, as he continued to be one of the best fielding first basemen in the league.

Waitkus’s story would provide part of the inspiration for Bernard Malamud’s The Natural, published in 1952.

Baseball is continuity. Pitch to pitch. Inning to inning. Season to season.