I have observed that baseball is not unlike war, and when you get right down to it, we batters are the heavy artillery.

MLB Spring Training means that the first day of spring and Opening Day are both just around the corner!  Here’s another great piece from Michael Ceraolo, published by Stanzaic Stylings, in anticipation of another season of baseball.

This weekend I finished reading Deadball: A Metaphysical Baseball Novel by David B. Stinson.  I stumbled upon this book accidentally, actually while looking for another book (I can no longer recall which) about the Dead Ball Era.  Stinson’s novel is not about the era — not really, anyways.  Rather, this novel is somewhat Field of Dreams-esque in that the book’s main character finds himself seeing the ghosts of long gone ballplayers and sometimes even the old ballparks they used to play in, but which have long since been abandoned or torn down.

The protagonist of this novel is one Byron

Bennett, a.k.a. “Bitty,” though he despises the nickname.  Byron is a former minor league ballplayer who never made it past the AAA level, but continues to stay obsessed with baseball and with baseball history.  As a kid, Byron once saw the deceased Babe Ruth hit a home run at a local ballpark.  Upon crossing home plate, Ruth winked at Byron, then disappeared.  Byron’s parents and friends dismissed the experience as Byron’s imagination.  Years later, Byron now finds himself having additional, similar experiences.

The year is now 1999, and Byron works for the minor league Bowie Baysox, an affiliate of his favorite MLB team, the Baltimore Orioles.  In his spare time, Byron not only goes to Orioles games, he also steeps himself in baseball history.  1999 represents the final year for baseball in Detroit’s Tiger Stadium, and with that in mind, Byron decides to travel to Detroit for the Orioles’ final series in that stadium.  He meets an older gentleman who calls himself Mac, though Byron suspects there is more to Mac than meets the eye.  For one thing, the bar where Byron meets Mac has been shut down and boarded up for years, as confirmed by the locals, though it certainly didn’t appear that way when Byron first came across it.

Byron’s road trip brings him not only to Detroit, but he also stops at the former site of Forbes Field, and he stops in Cleveland on his return trip.  Byron comes across a number of other characters, all who, like Mac, don’t seem like your normal, everyday humans-on-the-street.  Byron goes on various road trips throughout the season, visiting old ballpark sites in New York and Boston, and even stopping in graveyards to pay his respects to old ballplayers.  On his travels, Byron carries with him a copy of Lawrence Ritter’s Lost Ballparks, which he references whenever he finds himself in the presence of one of the old time baseball fields.  On occasion, the ballparks seem to come alive in his presence, and he starts to look forward to the occurrence.  Byron also has an encyclopedic familiarity with old ballplayers, and he is stunned to realize that the strange gentlemen he is meeting in his travels are all former, and now-deceased, ballplayers.

Byron’s friends, boss, and ex-wife are all concerned about him, of course.  They tell him it is time to stop living in the past and to let go of baseball so he can move on with his life.  The word “crazy” is thrown around liberally, and Byron sometimes even wonders himself.  He doesn’t understand how it is he is seeing these things, nor why.  In addition to the ghosts he comes across, Byron also meets a man named Peter, who is President of the Cleveland Spiders Historical Society and is very much alive.  Peter recognizes Byron’s ability to see old players and old ballparks, because he sees them as well.  However, Peter warns that he has known others like them, and those others no longer have any memory of ever having these visions.  Byron, in spite of his concerns about his own sanity, worries that he, too, will lose the ability to see the old ballparks.

Much of the novel is spent in the details of Byron’s exploration: descriptions of the ballparks, of the cities in which they are located, down to street-by-street directions at times.  These details sometimes border on tedious, but all the same, I had to admire their inclusion, as it makes it clear that the author, Stinson, has experienced these locations himself and is now gracious enough to share them with us.  The reader also doesn’t learn about the purpose behind Byron’s odyssey literally until the very, very end of the novel, which concerned me as I started to run out of pages and the resolution seemed nowhere in sight.  But a resolution does come, and it is a fascinating one.

I suppose I shouldn’t speak to the experience as just any casual reader, but as a baseball fan I thoroughly enjoyed this book.  The pages go by quickly, and I found myself immersed in the details, the characters, and in Byron’s knowledge of baseball.  The descriptions of the ballparks Byron was able to see even made me jealous, wishing that I could be in Byron’s shoes, seeing these ballparks myself, rather than just reading about them.  If you get the opportunity, I highly recommend this one.

Only 32 days until Opening Day! 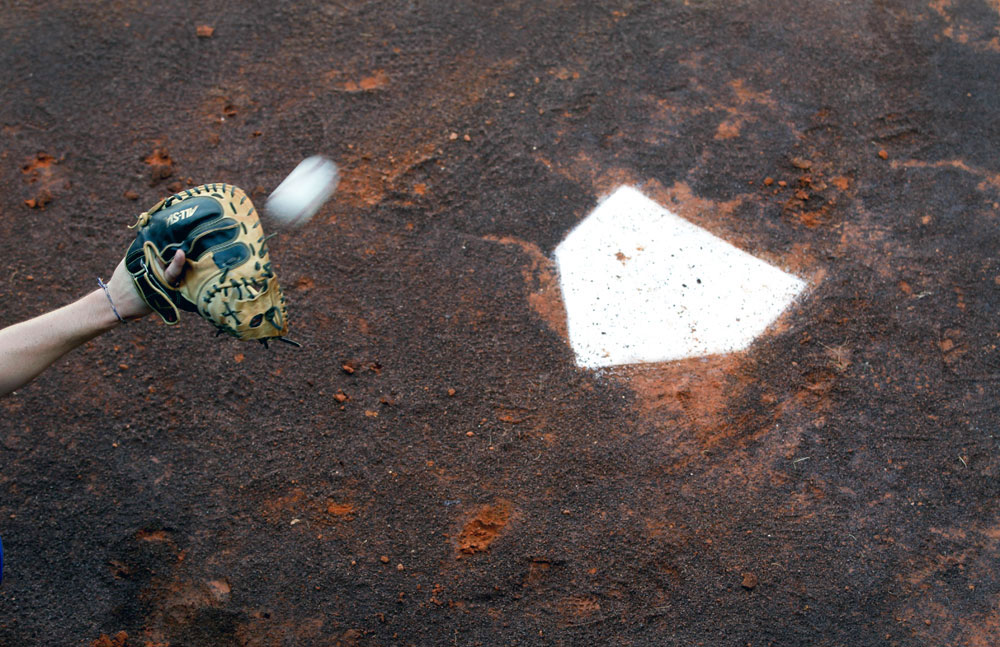 When I first started reading this poem by Edgar Guest, the first stanza gave me the impression that this would be about a man who used baseball as an analogy through which to teach his children important lessons about life.  Boy, was I wrong.  As I read on, I found myself smiling a bit, and even had to chuckle by the end.

The smell of arnica is strong,
And mother’s time is spent
In rubbing father’s arms and back
With burning liniment.
The house is like a druggist’s shop;
Strong odors fill the hall,
And day and night we hear him groan,
Since father played baseball.

He’s forty past, but he declared
That he was young as ever;
And in his youth, he said, he was
A baseball player clever.
So when the business men arranged
A game, they came to call
On dad and asked him if he thought
That he could play baseball.

“I haven’t played in fifteen years,
Said father, “but I know
That I can stop the grounders hot,
And I can make the throw.
I used to play a corking game;
The curves, I know them all;
And you can count on me, you bet,
To join your game of ball.”

On Saturday the game was played,
And all of us were there;
Dad borrowed an old uniform,
That Casey used to wear.
He paid three dollars for a glove,
Wore spikes to save a fall
He had the make-up on all right,
When father played baseball.

At second base they stationed him;
A liner came his way;
Dad tried to stop it with his knee,
And missed a double play.
He threw into the bleachers twice,
He let a pop fly fall;
Oh, we were all ashamed of him,
When father played baseball.

He tried to run, but tripped and fell,
He tried to take a throw;
It put three fingers out of joint,
And father let it go.
He stopped a grounder with his face;
Was spiked, nor was that all;
It looked to us like suicide,
When father played baseball.

At last he limped away, and now
He suffers in disgrace;
His arms are bathed in liniment;
Court plaster hides his face.
He says his back is breaking, and
His legs won’t move at all;
It made a wreck of father when
He tried to play baseball.

The smell of arnica abounds;
He hobbles with a cane;
A row of blisters mar his hands;
He is in constant pain.
But lame and weak as father is,
He swears he’ll lick us all
If we dare even speak about
The day he played baseball.

You got to be bad before you’re good.

Poor Charlie Brown.  He’ll just have to find a tree that’s been struck by lightning so he can craft himself a new bat.

This is an interesting graphic depicting a timeline of stadiums in the MLB and their various names and forms, starting in 1901.  Ballparks have taken on a myriad of incarnations throughout history.  Even changes to specific teams (for example, the Montreal Expos into the Washington Nationals) appear to be portrayed here as well.  Pennants and World Series championships also are noted on this graphic.

The only way to make money as a manager is to win in one place, get fired and hired somewhere else.