The greatness of Ty Cobb was something that had to be seen, and to see him was to remember him forever. 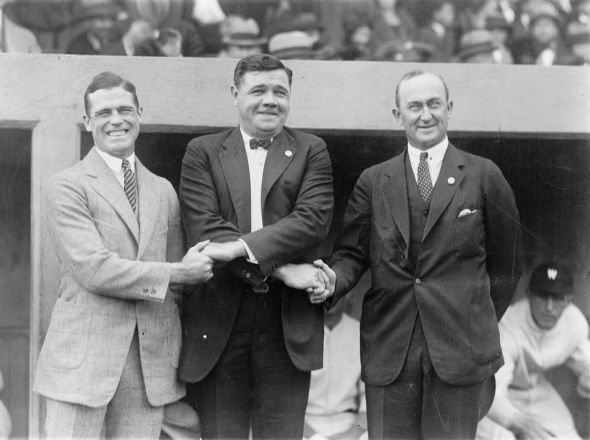 Here’s a weird little video whose existence I find rather mind-boggling. This is from a series called Epic Rap Battles of History, created by a couple guys who call themselves Nice Peter and EpicLLOYD. In this particular video, the creators dress up as Lance Armstrong and Babe Ruth. Armstrong comes under fire for the doping scandal, and Babe Ruth for his lifestyle in general. Pitting an endurance cyclist against a baseball slugger seems a lot to me like comparing apples to oranges, but it makes for an interesting, even entertaining, video all the same.

The Big Fella, by Jane Leavy

I recently finished making my way through Jane Leavy’s biography on the Great Bambino himself, entitled The Big Fella.  Like anyone else, I have heard most of the stories, I’m aware of the ballplayer’s legendary status, and as a kid, I memorized the list of nicknames spouted off by the kids of The Sandlot.  However, this is the first actual Babe Ruth biography I have ever read.

Fair warning: this biography is quite the tome.  It’s not quite War and Peace, but sitting at over 600 pages, it’s not exactly Animal Farm, either.  In my opinion, though, the journey through this volume is worth the time.  Using the barnstorming tour Babe Ruth took with Lou Gehrig after the 1927 World Series as the framework for the book, Leavy injects details about Ruth’s life and analysis about his personality and character to paint a broad and detailed portrait of the man and the ballplayer.

My favorite feature of this book lies in how human it portrays the Babe.  Ruth often gets depicted as this happy-go-lucky, larger-than-life figure who transcends not only baseball, but American culture itself.  Not that Leavy ignores this facet of Ruth’s character.  In fact, she goes into great detail about how this perception of the Babe pervaded American thought even during his lifetime.  Ruth certainly lived large, and the public loved him so much, the press even willingly kept many of his indiscretions quite.  When some of those indiscretions did leak out, fans were more than willing to overlook them, finding these to be a part of the ballplayer’s charm.

Leavy’s biography doesn’t focus just on this, however.  Ruth’s life, especially as a youth, was not an easy one.  The author includes stories about his birth, early youth, his life at St. Mary’s, and his introduction to professional baseball.  She also talks about Ruth’s drinking and womanizing, and while she doesn’t forgive the Babe for these, Leavy does juxtapose that side of Ruth with his affinity for playing with and helping kids.

The book also delves deeply into Ruth’s relationship with his manager, Christy Walsh.  We get an overview of Ruth’s personal finances, and Leavy demonstrates how much the Babe profited from Christy Walsh’s management.  She conveys the impact Ruth and Walsh had on popular culture, foreshadowing the celebrity-obsessed society that followed them and continues to pervade our world today.

Leavy also does a good job giving us a glimpse into the Babe’s shortcomings as a family man and the impact this had on his daughters.  There is also a great exploration of Ruth’s life after baseball, including the disappointments he faced as he continuously got turned down for management roles.  Leavy goes into detail about his final days, as well, discussing his illness and, ultimately, his death.

Overall, I was impressed.  I did, at times, wish that the structure of the book followed a more linear path, rather than bouncing around Ruth’s life the way that it does, but given the amount of research and detail included in these pages, it’s a shortcoming I’m willing to overlook.

Opening of the Baseball Hall of Fame clips

This short video from the Baseball Hall of Fame is a few years old, but I love the fact that it includes brief snippets from the opening ceremony in June 1939.  In the video, you’ll hear a few words from1939 inductee Eddie Collins as well as from Commissioner Kenesaw Mountain Landis, 1937 inductee Cy Young, and 1936 inductee Babe Ruth.  Videos of many induction speeches from those early years have proven hard to find, so coming across this video feels like a positive step in the right direction.

If you weren’t around in those times, I don’t think you could appreciate what a figure the Babe was.  He was bigger than the President.

The ball started climbing from the moment it left the plate.  It was a pop fly with a brand new gland and, though it flew high, it also flew far.

When last seen the ball was crossing the roof of the stand in deep right field at an altitude of 315 feet.  We wonder whether new baseballs conversing in the original package ever remark: “Join Ruth and see the world.”

On May 24, 1902, Cleveland third baseman Bill Bradley became the American League’s first player to hit a home run in each of four consecutive games.  This record would not be matched until Babe Ruth accomplished the same in June of 1918.

Here’s a fun documentary on the Great Bambino himself.  It’s interesting to think about how Ruth had such a great relationship with reporters that they were willing to keep mum about his indiscretions — something you would never see happen today.  I also really love how the Babe was so good with kids.

The singer of this tune, Bill Slayback, was a Major League pitcher himself, though his career was short-lived. Slayback appeared in 42 games, 17 as a starter, for the Detroit Tigers, culminating in a 6-9 record with a 3.84 ERA.