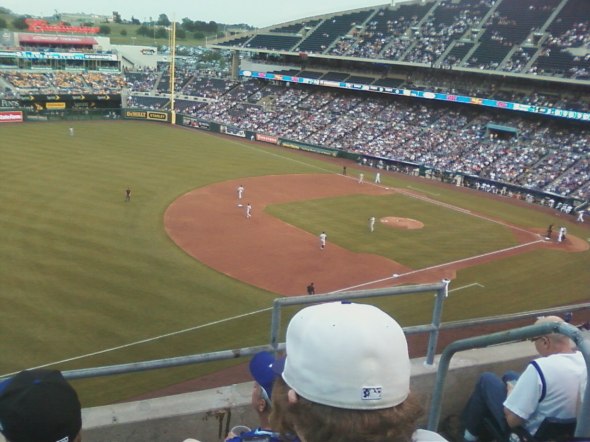 Kauffman Stadium in Kansas City, Missouri first opened as Royals Stadium on April 10, 1973. Construction for the stadium began in June 1967, when a $102 million bond was issued by Jackson County for construction of two sports stadiums.  One of those stadiums was for the Kansas City Chiefs of the National Football League.  The other stadium, meanwhile, was intended for the Kansas City Athletics.

The Philadelphia Athletics, owned by Arnold Johnson, had moved to Kansas City in 1955, bringing Major League baseball to the city for the first time.  The Athletics moved into Kansas City Municipal Stadium, a facility originally built in 1923, which was then rebuilt and expanded for the A’s.  Johnson passed away in March 1960, and on December 19, 1960, Charles Finely purchased a controlling interest in the Kansas City Athletics from Johnson’s estate.

In the early 1960s, Finely began looking to move the team to a new city.  In an effort to keep the Athletics in Kansas City, the Jackson County Sports Complex Authority was established to oversee construction and funding for a new sports complex for the A’s and the Chiefs, who also shared Municipal Stadium.  Original plans called for a multipurpose stadium, but these were scrapped due to design and seating capacity issues.  Going against the trend in other cities that were building multipurpose stadiums at the time, the county decided to build two new stadiums, one for the A’s and one for the Chiefs.

Charles Finely, however, did not want to wait for the construction of a new stadium, and in October 1967, Finely took the A’s to Oakland, California, where a new multipurpose stadium had just been erected.  After the move, United States Senator Stuart Symington of Missouri threatened to press for the revocation of baseball’s anti-trust exemption if they did not give Kansas City a new team.  The MLB responded by hastily granting expansion franchises to four cities, including a Kansas City team owned by a local pharmaceutical magnate, Ewing Kauffman. The new teams were scheduled to start playing in 1971.

However, pressure from Symington and other officials prompted the MLB to allow the expansion franchises to begin playing in 1969. The new club in Kansas City was named the Royals, and they played their first four seasons in Municipal Stadium.  Meanwhile, construction on the Truman Sports Complex, including the Royals’ new stadium and the Chiefs’ facility, Arrowhead Stadium, began on July 11, 1968.  The Royals played their first game in their new ballpark, originally named Royals Stadium, on April 10, 1973 against the Texas Rangers.

Royals Stadium was the American League’s first ballpark with Astroturf as the playing surface.  It held 40,793 seats, which all faced second base and were arranged in three tiers featuring maroon, gold, and orange seats.  The stadium’s most unique feature, however, was the display of fountains and a waterfall beyond the outfield fence.  Stretching horizontally for 322 feet, it remains the largest privately-funded fountain in the world.  The fountains are on display before and after the game and in-between innings, while the waterfalls are constantly flowing.  A twelve-story scoreboard, in the shape of the Royals’ crest, was placed beyond the center field fence.

In 1993, the stadium was renamed in honor of Ewing Kauffman.  Two years later, the Astroturf was replaced with grass.  Then, after the 1998 season, Kauffman Stadium was given a full makeover.  The renovation included the addition of Crown Seats, Dugout Suites, new clubhouses, and an exclusive restaurant and lounge known as the Crown Club.  All of the formerly-brightly-colored seats in the stadium were replaced with blue seats.

Then, on April 4, 2006, Jackson County, Missouri voters approved a 0.375% sales tax increase to fund plans to renovate the Truman Sports Complex, including a $256 million renovation of Kauffman Stadium.  Along with this, the Royals committed to a lease that will keep them in Kansas City until 2030.  The renovation included a reduction of capacity to 37,903, a new high-definition scoreboard in center field (known as “Crown Vision”), new bullpens perpendicular to the field, expansion of the seating in the Crown Club and Dugout Suites, and new fountain view terrace seats in the outfield.  New fan attractions included a kids’ area known as “the Little K” and a new Royals Hall of Fame in left field.

Four statues stand in the outfield concourse behind the fountains. Three of the statues are located in right field (featuring George Brett, Dick Howser and Frank White, all of whom have had their numbers retired by the Royals), and in left field is the former Royals owner Ewing Kauffman and his wife Muriel.