On May 9, 1871, Cuban infielder Esteban Bellán became the first Hispanic player to appear in a major league game. The twenty-one-year-old joined the Troy Haymakers of the National Association as they lost 9-5 to the Boston Red Stockings.

The first documented baseball game in Cuba took place on December 27, 1874 at Palmar de Junco.  In the contest, a team from Havana squared off against one from Mantanzas.  The game was called after seven innings, due to darkness, with Havana leading 51-9. 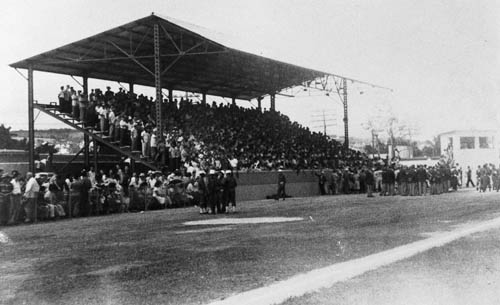 Last night, I watched Greener Grass: Cuba, Baseball and the United States, a documentary that recounts the history of baseball in Cuba.  It took some effort to get my hands on a copy, but with the help of the folks at the public library, I finally managed to get one through inter-library loan.

The history covered in the documentary begins in 1878, with the formation of the first Cuban League.  Throughout the video, the cultural and political implications of the game as it exists in Cuba receive scrutiny. Given the nature of the relationship between the United States and Cuba, it is no surprise that baseball would necessarily have a political role.  Up until the Cuban Revolution and the ban on professional sports in Cuba in the early 1960s, Americans and Cubans frequently played ball together on the small island nation.  Cuban baseball, in fact, had integrated several decades before American baseball.  As the documentary depicts, the game has served as both a connection and a barricade between the two nations.

The documentary incorporates a ton of historical footage, including interviews with men like Rene Arocha, who was among the first forty Cuban players to defect during the 1990s, Orlando “El Duque” Hernandez, who went on to play for the New York Yankees, and Tommy Lasorda, the former Los Angeles Dodgers manager who also played in the Cuban Professional League.

What struck me most intensely as I watched this film was the reverence that Cubans clearly hold for baseball.  This may be the National Pastime for the United States, but for Cuba, baseball holds an almost religious status.  The level of play and competition in this small nation rivals that of even the most talented American teams.  As Cuban fans like to point out, their teams don’t play for fame or money, but rather, they play out of love for the game.

In Cuba, you don’t talk about baseball, you argue…  ~popular saying

The first game of the Professional Baseball League of Cuba was played in Havana on December 29, 1878. Led by player-manager Esteban Bellán, Habana defeated Almendares, 21-20.  Bellán had also been the first Latin-born player to play in the American major leagues, spending three years in the National Association of Base Ball Players (NABBP) from 1868 to 1870, and three years in the National Association of Professional Base Ball Players (NAPBBP) from 1871 to 1873.