On June 23, 1963, Mets outfielder Jimmy Piersall faced Phillies pitcher Dallas Green to lead off the top of the fifth. Piersall swung on Green’s offering and blasted what was career homer number 100.

To celebrate the milestone, Piersall then decided to take Duke Snider up on his clubhouse bet and ran around the bases backward.  He completed his trip around the bases in the correct order: first, second, third, and home — he just faced backwards.  Piersall essentially backpedaled all the way around the infield. 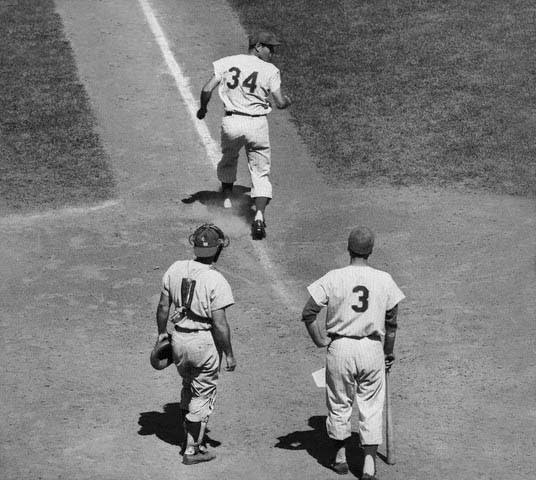 Attempting to beat a 12:30 a.m. curfew on March 5, 1958, the Dodgers’ Duke Snider, Johnny Podres, and Don Zimmer sustained minor injuries in a car accident in Vero Beach, Florida.  This automobile mishap was the third involving the Dodgers within the last two months, with prior crashes involving Roy Campanella and Jim Gilliam.

This day in baseball: Mays shoots to the top

On 26 September 1954, in the final game of the season, the Giants’ Willie Mays collected three hits to boost his batting average to .345.  In doing so, he passed teammate Don Mueller (who finished at .342) and the Dodgers’ Duke Snider (.341) to win the National League batting title.

Swing hard, in case they throw the ball where you’re swinging.