This day in baseball: Waitkus is Comeback Player of the Year

Seventeen months after being shot in the chest with a rifle by an obsessed fan, Eddie Waitkus was named the Comeback Player of the Year by the Associated Press on November 10, 1950. The Phillies’ infielder hit .284 that season and led the team with 102 runs scored, as he continued to be one of the best fielding first basemen in the league.

Waitkus’s story would provide part of the inspiration for Bernard Malamud’s The Natural, published in 1952. 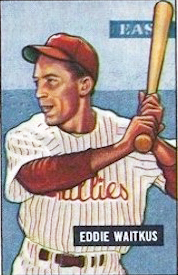