This day in baseball: The Babe hits number 300

Babe Ruth hit the 300th home run of his career on September 8, 1925. The knock came in the seventh inning of the second game of a doubleheader against the Boston Red Sox. The Yankees won that game 7-4 to complete a doubleheader sweep at Fenway Park. 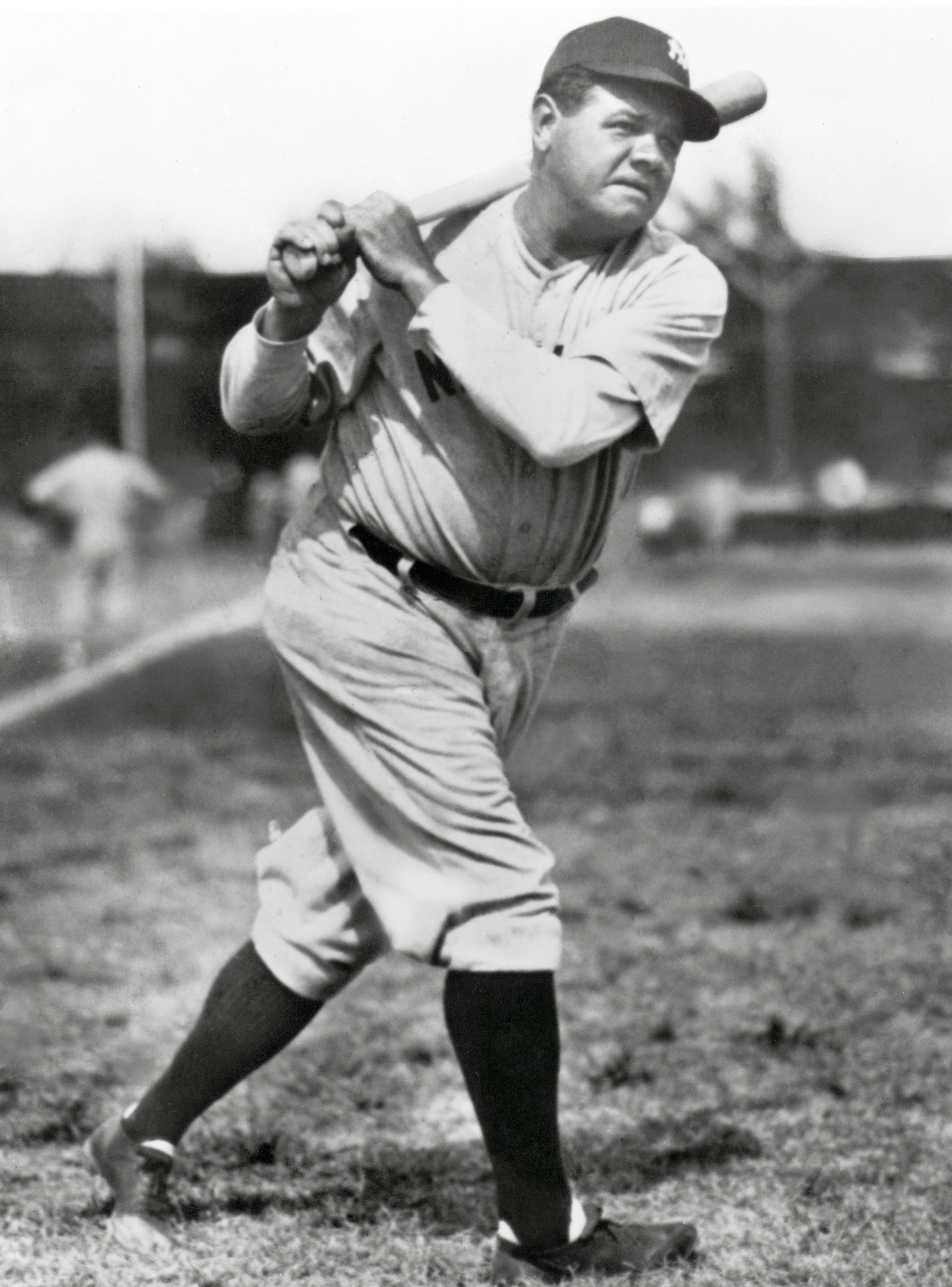 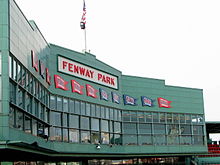 Fenway Park is the oldest Major League Baseball stadium currently in use.  The ballpark has hosted World Series games in eleven different seasons, with the Boston Red Sox winning six of those Series, and the Boston Braves winning one.

Construction on Fenway Park began in September 1911 in Boston, Massachusetts near Kenmore Square.  The ballpark opened on April 20, 1912, having cost $650,000 to build.  It had a capacity of 27,000 and featured a steel and concrete grandstand extending from behind home plate down the baselines, with wooden bleachers placed in the outfield.  The Red Sox played their first Fenway ballgame on that date against the New York Highlanders (Yankees), winning 7-6 in eleven innings.  The opening of the new ballpark found itself overshadowed in the news, however, by the sinking of the Titanic just the week before.

In 1914, the Boston Braves played their home games during the World Series at Fenway Park, due to the construction on their own new stadium, Braves Field, still being in progress.  The Braves would get the opportunity to return the favor before too long.  As any baseball fan will know, Babe Ruth played with the Red Sox prior to his time with the New York Yankees.  During his stint in Boston, Ruth helped the Red Sox to World Series titles in 1915, 1916, and 1918.  The 1915 and 1916 Series, however, were not played at Fenway Park, but rather at Braves Field, in order to accommodate a larger crowd.

Throughout the late-1910s and into the 1920s, the Boston team struggled financially, a situation that resulted in the sale of Babe Ruth to New York and led to the disrepair of various features of Fenway Park.  In 1926, a great fire engulfed the wooden bleachers in left field of the ballpark.  However, these bleachers hadn’t seen much use leading up to the incident anyway, due to their dilapidated state.  Finally, in 1933, the Red Sox were sold to millionaire Tom Yawkey.  Yawkey invested in renovations to Fenway, including the blue, wooden grandstand seats that remain in the stadium to this day.

The Green Monster in left field actually began as a mere ten-foot fence.  When he came into ownership of the team, Yawkey opted not to replace the fire-destroyed wooden bleachers in that part of the stadium.  Instead, during the 1933-1934 off season, Yawkey rebuilt much of Fenway, including the erection of a 37-foot left field wall, initially covered in advertisements.  A scoreboard was also added to Fenway Park in 1934, at the base of the great wall.  At the time, the new board was considered a type of advanced technology, and the scoreboard remains at Fenway to this day, with scores continuing to get updated by hand.  The wall would actually become the “Green Monster” in 1947 when advertisements were removed from the wall and it received a dark green paint job.

The “Williamsburg” area of the ballpark in right field was named for the legendary hitter, Ted Williams.  It is said that the right field bullpen area, constructed in 1940, was built specifically to accommodate Williams’s left-handed swing, pulling the right field wall in closer to home plate.  Also found in the right field stands sits a lone red seat.  This seat is a nod to the 502-foot home run Williams hit in 1946 — the longest homer in Fenway history.

Light towers were then added to Fenway, and the Red Sox would host their first night game on June 13, 1947 against the Chicago White Sox.  It wouldn’t be until 1976 when Fenway saw its next big change, when a $1.5 million electronic scoreboard was added above the stands in center field.  Also in 1976, the Green Monster was refurbished, tearing down the old, tin wall and replacing it with a steel reinforced wall of hard plastic.

Private luxury suites were added to the ballpark’s upper deck from 1982 to 1983.  Bleacher seats were also replaced with individual seats in order to allow season tickets to be sold to fans for those parts of the stadium.  In 1987-1988, a color video board was erected above the center field seats, replacing the old scoreboard, and in 1989, the media level was added.  Also in 1989, the 600 Club was constructed, featuring luxurious seats, climate control, and a great view of the field.  The 600 Club would be renamed the .406 Club after the passing of Ted Williams in 2002, in honor of his historic batting average from the 1941 season.  It would get renamed yet again in 2006 to the EMC Club.

The dugouts in Fenway are the only ones remaining in baseball with support poles in front of the players’ benches.  Throughout the stadium, support beams can also be found, even though other clubs around the league have made a point to no longer have these kinds of support beams in their own stadiums.  The beams at Fenway result in obstructed views for some fans, yes, however, the vertical poles have remained as a way to maintain Fenway’s old-time aura.

Just prior to the 2003 season, the Green Monster had bar-style seating added to the top of it, which became a major fan draw.  That year, box seats were also added right behind home plate.  In 2004, another two hundred seats were added to the roof high over right field, featuring tables at which fans get to sit during the game.  During the early-2010s, the blue, wooden seats that fill the ballpark were systematically repaired and waterproofed.

From May 15, 2003 until April 10, 2013, the Red Sox sold out 820 consecutive home games at Fenway, which makes it the longest home sellout streak in Major League Baseball history.  Fenway has also played host to many other sporting and cultural events, including: professional football games for the Boston Redskins, the Boston Yanks, and the Boston Patriots; music concerts; soccer and hockey games (including the 2010 NHL Winter Classic); and political and religious campaigns.

On March 7, 2012, just ahead of the stadium’s centennial, Fenway Park was added to the National Register of Historic Places. 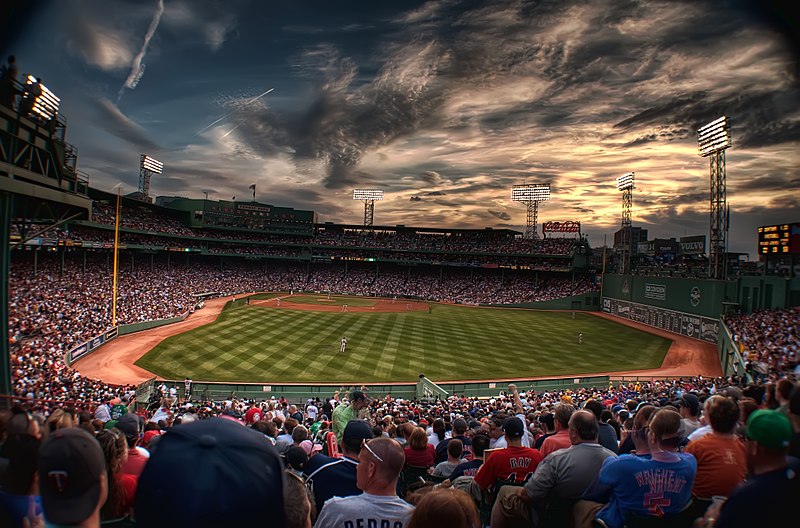 This day in baseball: Ruth vs. Johnson vs. extra innings

At Fenway Park on August 15, 1916, Red Sox pitcher Babe Ruth came out victorious over Walter Johnson and the Senators, 1-0 in 13 innings.  Though Johnson managed to keep Boston to four hits over the first twelve innings, he gave up three more hits in the 13th, thus allowing Jack Barry to score the game’s lone run. 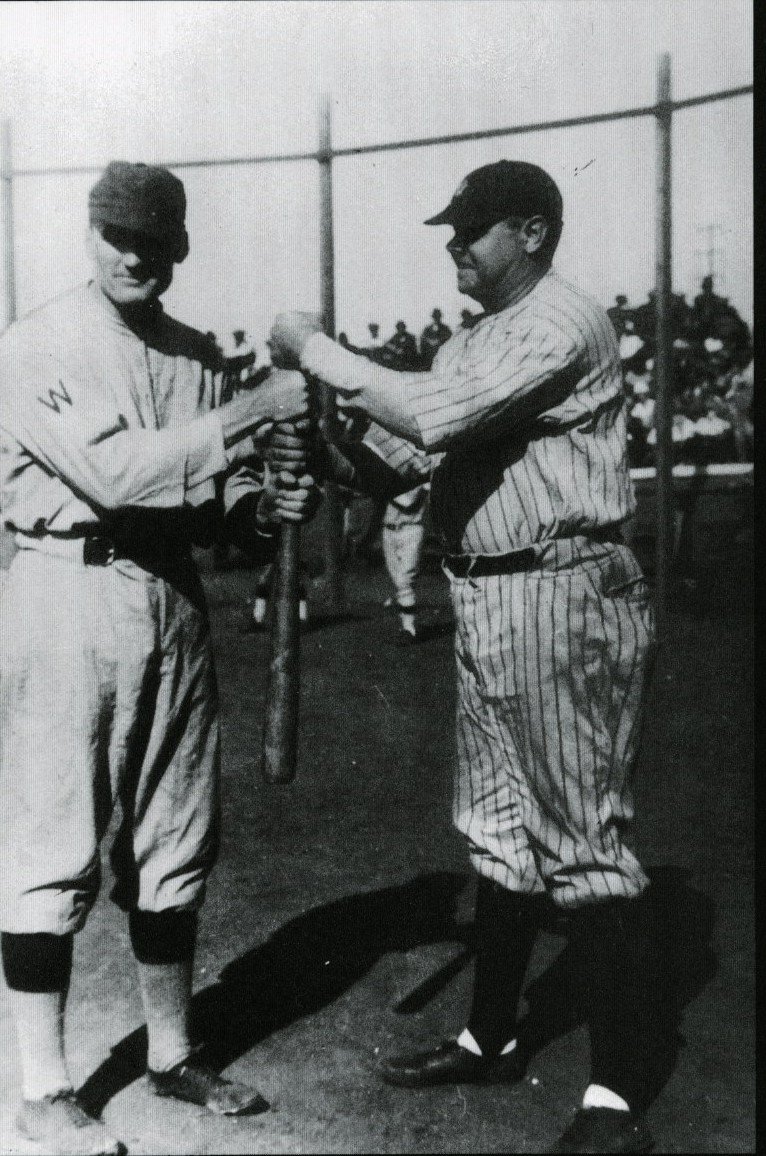 That moment, when you first lay eyes on that field — The Monster, the triangle, the scoreboard, the light tower Big Mac bashed, the left-field grass where Ted (Williams) once roamed — it all defines to me why baseball is such a magical game. 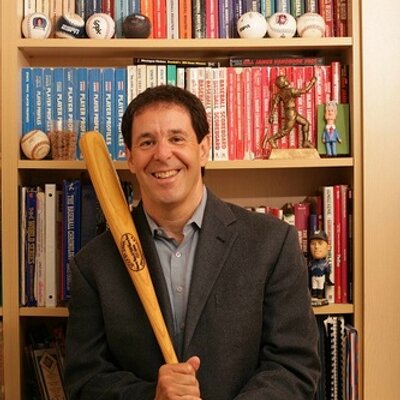 This day in baseball: First no-hitter at Fenway

*Not to be confused with Andrew “Rube” Foster, organizer of the Negro National League.

The first game ever played at Fenway Park took place on April 9, 1912. In an exhibition contest between Harvard and the Red Sox, played in the cold and the snow, Crimson third baseman and captain Dana Wingate became the first batter in the Boston ballpark, being struck out on a fastball by Casey Hageman. 3,000 fans braved the wintery weather to watch the shortened contest. 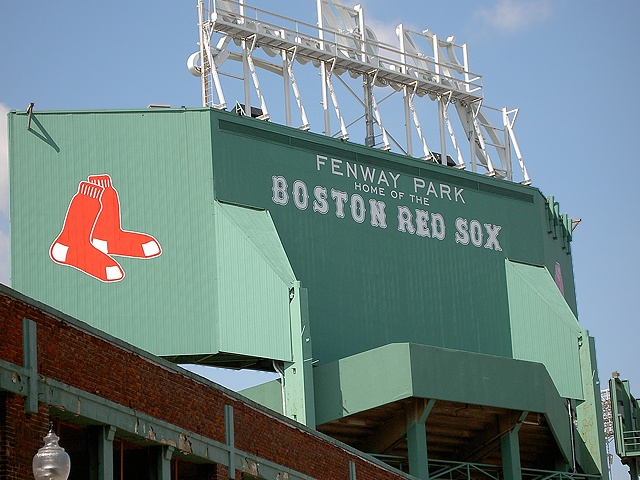 Just one month until Opening Day.  Who else is excited? 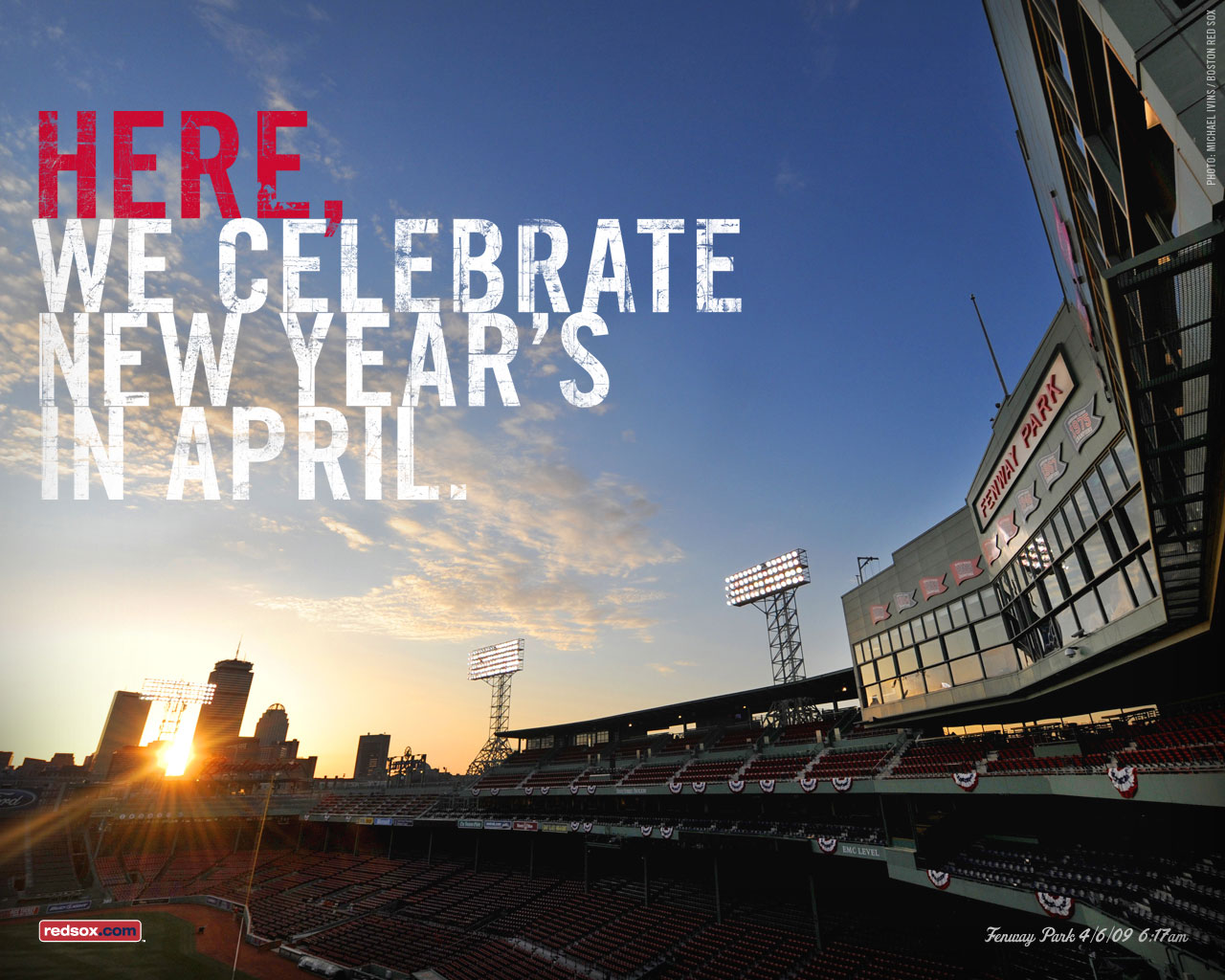 Why? Why should the bond between a people and their baseball team be so intense? Fenway Park is a part of it, offering a physical continuum to the bond, not only because Papi can stand in the same batter’s box as Teddy Ballgame, but also because a son might sit in the same wooden-slat seat as his father. 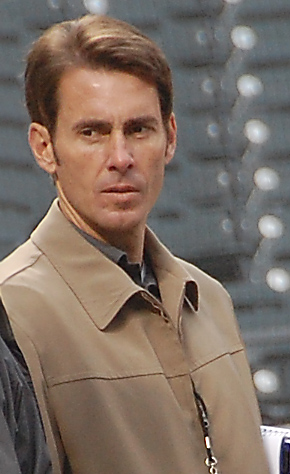 As I grew up, I knew that as a building (Fenway Park) was on the level of Mount Olympus, the Pyramid at Giza, the nation’s capitol, the czar’s Winter Palace, and the Louvre — except, of course, that is better than all those inconsequential places.

It’s been nearly two years since I first wrote about Pat Venditte, who at the time was a switch-pitcher in the Yankees organization.  Last night, Venditte made his Major League debut with the Oakland A’s, as they faced the Boston Red Sox at Fenway Park. 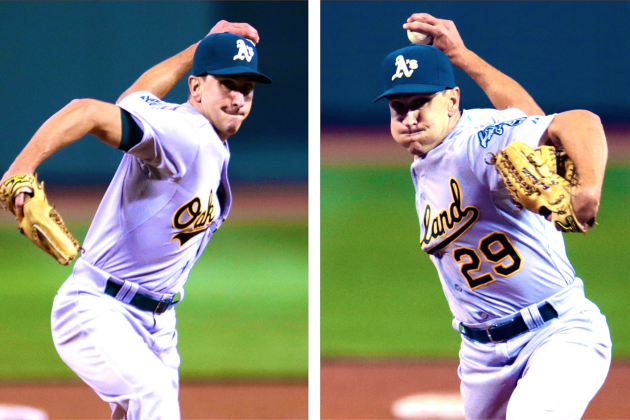 How did he do?  The first full-time switch-pitcher of the modern era threw two scoreless innings, beginning the seventh pitching with his left arm to get Brock Holt to ground out, then coaxing a double-play ball out of Mike Napoli throwing with his right.  He only faced three in the eighth inning, though switch-hitter Blake Swihart did give him a momentary crisis of “which side should I pitch from?”

That’s not a bad conundrum to have, in the grand scheme of things.  To be a young pitcher making history in this manner, and having the opportunity to do it at Fenway?  Can’t complain about that!

Pat Venditte became first MLB player to record an out as LHP and RHP in same inning since Greg Harris did so for Expos on Sept. 28, 1995.