To replace the three-man National Commission, formerly governed by league presidents Ban Johnson and John Heydler and Reds owner Garry Herrmann, Kenesaw Mountain Landis became baseball’s first commissioner on January 21, 1921. After expressing initial reluctance, Landis accepted the job in November 1920 for seven years at a salary of $50,000, on condition he could remain on the federal bench. 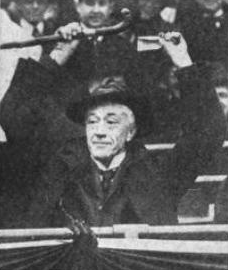 Landis opens the 1921 season (The Outlook)