Henry Chadwick and the box score

In 2009, NPR’s Morning Edition did this short report on Henry Chadwick and the creation of what many consider to be the first box score:

The box score, as well as the various statistics that exist in the game, have evolved tremendously over the years. But it’s pretty commonly accepted that Chadwick is the man we have to thank for getting the ball rolling on the mathematical record-keeping side of the game.

You can find the full NPR story, including the text portion, here.

Batter Up!: Baseball at the Library of Congress webinar

Bat and ball games have been around in a variety of forms for a long, long time.  What I didn’t realize was that versions of bat and ball games went back as far as ancient Egypt (though, the concept of hitting a ball with some form of club is honestly very elementary, so I don’t know why this surprised me).

The webinar debunks the Abner Doubleday myth, which claimed Doubleday invented the game in 1839 in Cooperstown, New York, pointing out that early incarnations of baseball existed well ahead of the time of Doubleday’s supposed founding of the game.  For example, a game known as “Base Ball” was referred to in The Pretty Little Pocket Book in 1787, though the images of the game in said book look nothing like today’s pastime. 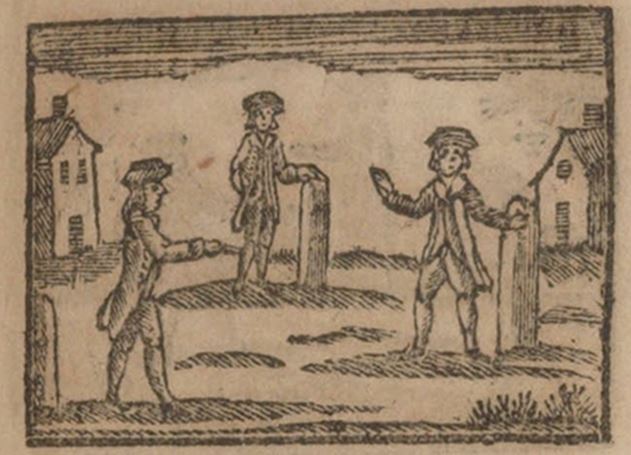 Base Ball gets referenced in a number of sources after that, including this 1823 article:

Industrialization and urbanization in the nineteenth century contributed to the rapid growth of the game.  Other sports, including horse racing and boxing, were popular at the time, but the appeal for these did not match the appeal of baseball.  Over time, the separation between work and play grew more pronounced in America, and baseball became a popular form of leisure in the off hours of industrial workers.  Over time, the rules of the game evolved, and in the mid-nineteenth century, the New York Knickerbockers were founded, leading to a greater standardization of baseball rules. 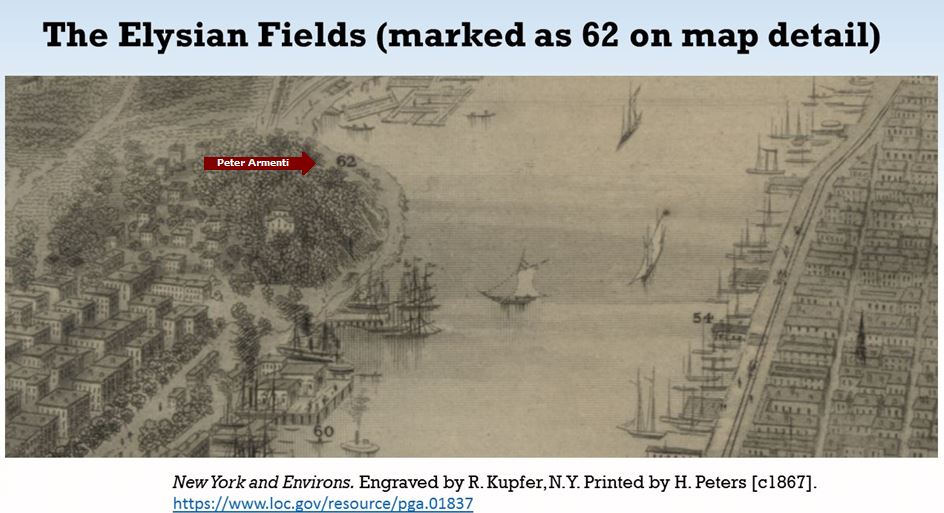 The webinar goes into the development and codification of rules, including the establishment the 90-foot distance between bases, nine players per side, the elimination of “soaking,” and so on.  There were two versions of the game at first, the Massachusetts and the New York games, but in the end, the New York version of baseball won out. 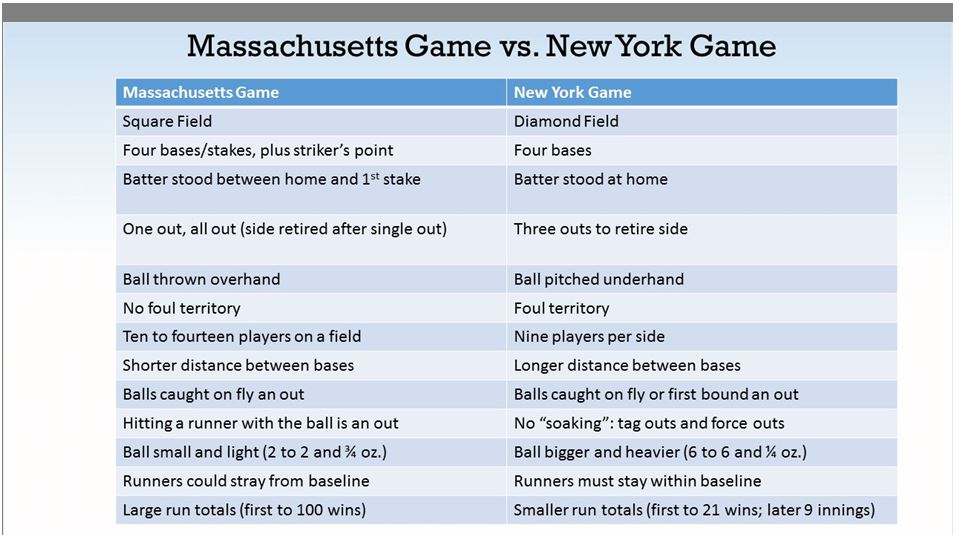 In the meantime, baseball spread rapidly, including a club in San Francisco in the mid-1800s that became California’s first (known) ball club.  The outbreak of the Civil War also contributed to the spread of baseball’s popularity.

Baseball was also being played within the black population in the late-nineteenth century, and women also participated in the game as well.  The webinar did not go into a lot of detail regarding these, but it did at least touch on them. 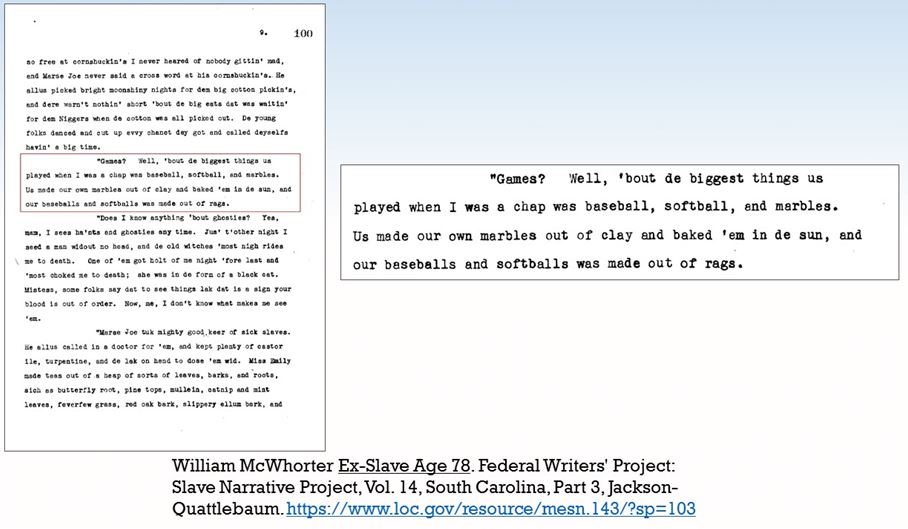 In 1868, it became allowed (publicly) for players to get played (some players had been receiving under-the-table compensation prior to this).  In September of that year, the Cincinnati Red Stockings became the first all-professional ball team, bringing an end to the amateur baseball era.  The National Association of Professional Base Ball Players then became established in 1871, then today’s NL was established in 1876.

The Doubleday myth, as we know now, was the brainchild of Albert Spalding and the Mills Commission at the turn of the century.  Spalding despised the idea that baseball evolved from the English game of rounders, as was argued by Henry Chadwick, and thus he set out to prove its American origins.  Spalding released the commission’s findings of baseball’s origins in 1905.  The results were deemed official by the end of 1907, then published in Spalding’s Base Ball Guide in 1908. 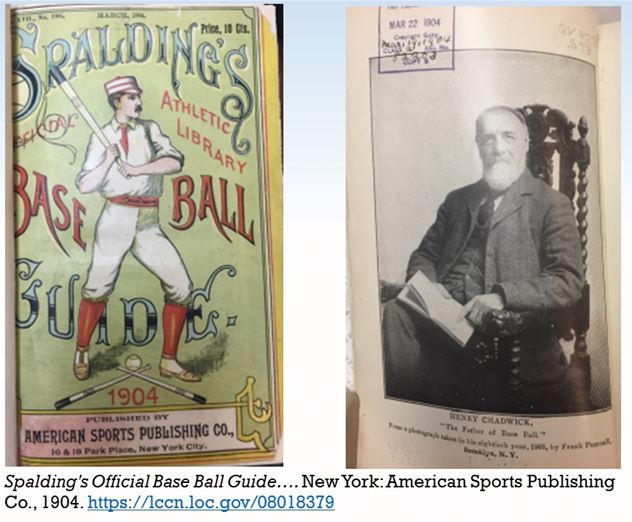 The webinar picks apart the arguments of the Mills Commission, pointing out that it is not possible that Doubleday could have invented baseball.  Doubleday’s own lack of mentioning the game aside, the events outlined by the commission regarding baseball’s findings did not match up with the events of Doubleday’s life.

The webinar concluded with a brief question-and-answer session.  The bit about ancient Egypt aside, I can’t say I learned much new from the session, which naturally is going to happen when you attend a webinar about something you like to study anyhow.  However, it’s always nice to get a refresher on things, and the Library of Congress did a great job with this.

In our sun-down perambulations, of late, through the outer parts of Brooklyn, we have observed several parties of youngsters playing base, a certain game of ball…Let us go forth awhile, and get better air in our lungs. Let us leave our close rooms…the game of ball is glorious.  ~Walt Whitman

Thus begins the first disc of Baseball: A Film By Ken Burns.  This is a series that I’ve checked out from the library and started watching multiple times, yet never managed to finish.  In an effort to change this, I’ve decided to commit myself to writing about each “Inning” of the series here.  This way, I have a form of accountability to encourage me to get through the whole thing.

Approximately the first twenty minutes of the first disc serve as kind of a nostalgic, feel-good introduction to the series and the game.  Images of Babe Ruth, Christy Mathewson, Jackie Robinson, Ted Williams, and several others flash across the screen to a background of melodic music and various speakers ruminating about what an incredible game baseball is.

The First Inning then begins with the myth of baseball’s founding by Abner Doubleday.  Burns describes the story behind Doubleday’s supposed invention of the game, then immediately refutes it, asserting that Doubleday likely never even saw a professional game.  Baseball, rather, is most likely a direct descendant of two British sports: rounders and cricket.  The game went through multiple variations until the founding of the New York Knickerbockers and the codification of rules by Alexander Cartwright.  Henry Chadwick soon appears on the scene and becomes instantly enamored with baseball.  Chadwick went on to invent the box score, using statistics to track players’ performances.  The National Association of Base Ball Players was then formed to help maintain control over the sport and further codify the rules.

The outbreak of the American Civil War presented a disruption to organized baseball.  On the other hand, it also served to help spread the game’s popularity as soldiers returning home at the end of the war took knowledge of the sport with them.  In spite of the end of slavery, black teams found themselves banned from organized leagues.  Women and girls, also, struggled for the right to play ball, as it was deemed too violent and dangerous for the fairer sex.

Burns chronicles the evolution of baseball from its status as an amateur pastime to a professional sport — a business.  It is evident from his focus on the establishment of the reserve clause that Burns intends to delve into the subject further.  It only makes sense to do so, of course, given the impact that this clause would have on the occurrence of so many events throughout the game’s history.  Burns also puts some attention on gambling, which, as we know, would also impact baseball’s timeline of events.

The First Inning covers the development of the NL, the AA, the Players’ League, and the rise of Albert Spalding.  A number of players are introduced, including Cy Young, Cap Anson, King Kelly, and John McGraw.  We also meet Moses Fleetwood Walker and the bigotry he faced in the big leagues as a black player.  This, followed closely by a discussion of Branch Rickey’s early life, present a foreshadowing recognizable by anyone familiar with the game’s history.

Most histories I have seen covering this period in baseball seem to treat the game with a kind of veneration.  Personally, this is perhaps my favorite period in the game’s history to learn about, possibly in part due to this sense of awe that it brings out about baseball.  So much of what happens next has already been established, yet there is still something pure and clean about baseball during the 19th century.

Icepocalypse 2017 is underway in the Midwest, and what better time to talk about the game of baseball being played on ice skates?  Believe it or not, for a brief period of time, baseball on ice was actually a thing.

The first known instance of baseball being played on ice took place on January 1, 1861 in Rochester, New York, when two local teams took up a game on skates before a crowd of about two thousand spectators.  Later that year, the Brooklyn Atlantics defeated the Charter Oaks, 36-27, in their own slippery competition.  I have to tip my hat to these guys — I can barely handle ice skating sans bat and ball.  Can you imagine trying to pitch effectively without falling down?

Sadly, the ice baseball fad didn’t last long.  Four years later, in 1865, the Brooklyn Eagle wrote, “We shall have no more ball games on ice. … If any of the ball clubs want to make fools of themselves, let them go down to Coney Island and play a game on stilts.”  (By the way, if anyone is aware of an actual instance of a baseball game on stilts, please let me know!)  There doesn’t seem to be any definitive explanation as to why the game on ice lost popularity.  There is speculation that it was due to a poor quality of play, or perhaps the owners of the various skating rinks didn’t appreciate their ice getting so torn up.

There was an attempt at a comeback about twenty years later.  Baseball, still being a new game with a lot of eager fans and players, was practically a year-round form of recreation.  In January 1884, when the winter weather prevented a conventional game from being played, the diamond at Washington Park was converted into an ice rink so that games could continue and fans’ demand for some baseball entertainment could be met.

On January 12th of that year, Henry Chadwick assembled a team of amateurs to take on Brooklyn, managing to out-skate the pro team on their way to a 41-12 victory.  A few days later, the two teams faced off again, and this time Brooklyn managed to save face with a 16-8 win.  Unfortunately, there doesn’t seem to be record (that I can find) of an ice baseball game being played after this time.

The concept of baseball on ice isn’t completely forgotten today, as an NHL ice crew demonstrated a couple years ago.  In December 2014, in order to test the ice prior to the NHL Winter Classic, tossed around a baseball while skating on the rink.  If I was any good on skates, I would love to try this myself.

This day in baseball: The first professional league