This piece by Yusef Komunyakaa was published originally in Magic City in 1992.  It serves as a nod to black baseball as well as a depiction of baseball as play in juxtaposition to the working lives of black Americans.  Life is hard for these young men, but the game provides them with an outlet to help them get through it all.

Most were married teenagers
Working knockout shifts daybreak
To sunset six days a week–
Already old men playing ball
In a field between a row of shotgun houses
& the Magazine Lumber Company.
They were all Jackie Robinson
& Willie Mays, a touch of
Josh Gibson & Satchell Paige
In each stance and swing, a promise
Like a hesitation pitch always
At the edge of their lives,
Arms sharp as rifles.
The Sunday afternoon heat
Flared like thin flowered skirts
As children and wives cheered.
The men were like cats
Running backwards to snag
Pop-ups & high-flies off
Fences, stealing each others’s glory.
The old deacons & raconteurs
Who umpired made an Out or Safe
Into a song & dance routine.
Runners hit the dirt
& slid into homeplate,
Cleats catching light,
As they conjured escapes, outfoxing
Double plays. In the few seconds
It took a man to eye a woman
Upon the makeshift bleachers,
A stolen base or homerun
Would help another man
Survive the new week.

“Poem for My Father,” by Quincy Troupe

This piece was published in 1996 in Avalanche, a collection of poetry by Quincy Troupe.  It is not only a piece from a son to his father, but also a great tribute to the Negro Leagues.

father, it was an honor to be there, in the dugout
with you, the glory of great black men swinging their lives
as bats, at tiny white balls
burning in at unbelievable speeds, riding up & in & out
a curve breaking down wicked, like a ball falling off a table
moving away, snaking down, screwing its stitched magic
into chitlin circuit air, its comma seams spinning
toward breakdown, dipping, like a hipster
bebopping a knee-dip stride, in the charlie parker forties
wrist curling, like a swan’s neck
behind a slick black back
cupping an invisible ball of dreams

& you there, father, regal, as an african, obeah man
sculpted out of wood, from a sacred tree, of no name, no place, origin
thick branches branching down, into cherokee & someplace else lost
way back in africa, the sap running dry
crossing from north carolina into georgia, inside grandmother mary’s
womb, where your mother had you in the violence of that red soil
ink blotter news, gone now, into blood graves
of american blues, sponging rococo
truth long gone as dinosaurs
the agent-oranged landscape of former names
absent of african polysyllables, dry husk, consonants there
now, in their place, names, flat, as polluted rivers
& that guitar string smile always snaking across
some virulent, american, redneck’s face
scorching, like atomic heat, mushrooming over nagasaki
& hiroshima, the fever blistered shadows of it all
inked, as etchings, into sizzled concrete
but you, there, father, through it all, a yardbird solo
riffing on bat & ball glory, breaking down the fabricated myths
of white major league legends, of who was better than who
beating them at their own crap
game, with killer bats, as bud powell swung his silence into beauty
of a josh gibson home run, skittering across piano keys of bleachers
shattering all manufactured legends up there in lights
struck out white knights, on the risky edge of amazement
awe, the miraculous truth sluicing through
steeped & disguised in the blues
confluencing, like the point at the cross
when a fastball hides itself up in a slider, curve
breaking down & away in a wicked, sly grin
curved & posed as an ass-scratching uncle tom, who
like old sachel paige delivering his famed hesitation pitch
before coming back with a hard, high, fast one, is slicker
sliding, & quicker than a professional hitman—
the deadliness of it all, the sudden strike
like that of the “brown bomber’s” crossing right
of sugar ray robinson’s, lightning, cobra bite

& you, there, father, through it all, catching rhythms
of chono pozo balls, drumming, like conga beats into your catcher’s mitt
hard & fast as “cool papa” bell jumping into bed
before the lights went out

of the old, negro baseball league, a promise, you were
father, a harbinger, of shock waves, soon come

Continuing on with the journey through Baseball: A Film By Ken Burns brings us to the decade of the 1930s.  The United States, indeed, the world, was facing off against the Great Depression during the 1930s.  As a result of high unemployment rates and widespread poverty, few could afford the price of tickets to attend professional baseball games, and as a result, attendance fell drastically.  Baseball did what it could to try to draw fans back in, from the first All-Star game to the creation of the Baseball Hall of Fame.  However, the financial difficulties that faced the nation at this time were too great.

Even as the Depression was getting underway, the Yankees signed Babe Ruth to the biggest contract in baseball history in the early 1930s.  It was a move that seems only too-appropriate, given Ruth’s ostentatious lifestyle.  Meanwhile, Lou Gehrig continues to stay merely in the shadows of the spotlight, in spite of his consecutive game streak and consistent high level of play. 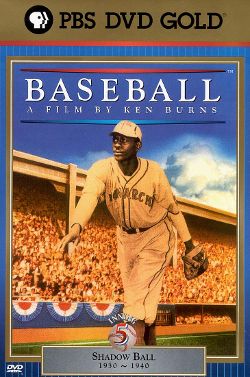 Subtitled “Shadow Ball,” the Fifth Inning of this series by Ken Burns focuses on black baseball.  (The subtitle, by the way, is not a reference to race, but rather to the illusion that these games weren’t being played with a ball at all, because it could barely be seen.)  While white baseball suffered during the Depression, black baseball flourished.  Many black teams came under control of racketeers, as they were among the few who could afford to fund baseball during this time, but interestingly, this seemed to be to the advantage of the Negro Leagues.  And the crowds flocked to watch the black teams play.  Listening to the nostalgia in the voices of former negro leagues players, you can tell there was a true love for the game, even in spite of inequality, the hard road trips, and the racism they faced.

We learn about Satchel Paige, considered by some to be the greatest pitcher in all of baseball.  He had such an arsenal of pitches that few could hit off Paige.  Some saw him as black baseball’s equivalent of a Babe Ruth, in that he drew large crowds to ball games.  He even seemed to hold true to this comparison in his off-field personality.  He hated to drive slow and cultivated a persona for those around him.  Buck O’Neil, however, indicates there was much more to Paige than often met the eye.

Babe Ruth himself became the center of attention yet again during the 1932 World Series in Chicago when, in Game 3, he appeared to call his shot.  No one will ever know for certain whether he really did, or if Ruth was merely engaging in a different gesture altogether, but it was a moment that, as we all know, has remained a part of the baseball psyche for decades.  As the decade went on, however, Ruth’s level of play would decline, as it always does as a ballplayer gets older.  When the Yankees made it clear they would not offer him a manager position, he did a brief stint with the Boston Braves, then retired from baseball.  Meanwhile, new stars stepped into the spotlight.  Not just Lou Gehrig, but also figures like Mel Ott, Jimmie Foxx, Dizzy Dean, and Bob Feller.

As for home run hitters in the Negro Leagues, catcher Josh Gibson was well-known for this ability.  While many called him a black Babe Ruth, Burns notes, there were some who thought they had the comparison backwards, and that Babe Ruth was actually a white Josh Gibson.  Indeed, the list of accomplishments for Gibson certainly seems to pass those of Ruth, including a season with seventy home runs, some of which exceeded 575 feet in distance.  The Negro Leagues’ version of the Yankees were the Kansas City Monarchs, led by first baseman Buck O’Neil.  In his commentary, O’Neil speaks about the camaraderie between the players and the fans.

We learn about the 1930s Brooklyn Dodgers, “dem bums,” and we learn about the 1934 St. Louis Cardinals, the “Gashouse Gang.”  In 1936, Joe DiMaggio made his first appearances as a rookie with the New York Yankees.  DiMaggio would help lead the Yankees to four World Series.  Also in the thirties, we see the first night game in Major League Baseball (though night games had been played in the Negro Leagues for some time) and the increasing popularity of radio broadcasts, especially those by Red Barber, created new fans, as more and more people came to understand the game.

During the off season, many black players traveled south to Mexico, Latin America, and the Caribbean.  In doing so, they were able to play baseball year round.  They also discovered that the racial attitudes south of the United States were very different.  They were paid more and welcomed more warmly by the locals than they were back home.

Discrimination didn’t stop with just the black population.  Hank Greenburg came into prominence as first baseman for the Detroit Tigers.  He wasn’t the first Jewish player in the game, but he was probably the first to really make a name for himself.  Greenburg faced a considerable backlash of anti-Semitism, but his stellar play eventually helped to win fans and players over.  Greenburg felt his role was of particular importance in light of the actions of one Adolf Hitler in Europe.

In 1939 came Lou Gehrig’s ALS diagnosis, and thus the end of his streak and his baseball career.  On July 4th of that year, Gehrig gave his “Luckiest Man” speech at Yankee Stadium.  Two years later, he passed away from the disease, which now bears his name.

1939 also saw the opening of the National Baseball Hall of Fame and the induction of the first Hall of Fame class.  It was the 100-year anniversary of the myth of Abner Doubleday‘s founding of baseball in 1839.  The disc then ends with Buck O’Neil describing the long-awaited matchup between Satchel Paige and Josh Gibson — Negro League Baseball’s best pitcher versus it’s best hitter.  O’Neil’s account left me with a smile.