Somebody once asked me if I ever went up to the plate trying to hit a home run. I said, ‘Sure, every time.’ 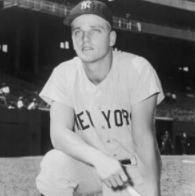 I had never considered the possibility that the mighty, fabled Casey would have a baseball card, but Robert Harrison has managed to spin an entire tale about it.  Seen as even more valuable than a card for either Mantle or Cobb, the Casey baseball card causes quite an uproar in this piece.

The outlook wasn’t great for
finding Casey’s card.
The dealers denied they had him
as I fought against the mob.
And then as Cooney was seen in mint
and Barrows appeared the same,
a sense of elation came to me in this baseball hobby game.

A cardshark got fed up and passed me in despair.
The rest clung to their hobby hopes
and prayed the Casey card was near;
They thought, by the Topps high numbers,
if we could only find his card,
we’ll pay any price even if it’s marred.

Then Flynn (Casey’s mate) was found in very good-
a crease along his neckline stretched into his wood.
So they all bid to possess that crazy players card
until all turned to silence when Mr. Mint
got the final nod.

After Flynn, they found Jimmy Blake,
a tobacco card mistake;
For Blake was frayed and ugly and had
scratches on him from head to toe,
and the collectors were not interested
for the price he fetched was very low.

Then from fifty baseball card collectors
there rose a mighty roar.
It echoed from every table, it bounced off the floor,
it was carried by the newsmen
and was heard outside the door,
for the Casey card, the rarest card
now everyone saw.

There was a full gloss in Casey’s picture
as he posed beside the plate
there were full white borders and a hawkish
look upon his face.
And from an old shoebox he was raised above the crowd.
This symbol of the hobby now had everyone aroused.

Ten thousand dollars was offered;
the smell of gum hung in the air.
Five thousand more, said another,
as he took up on this dare,
Then while the price was raising
beyond the hopes of hobby folk,
a disbelief filled the children’s minds;
for they thought this all was a joke.

For this gem-mint card was dropped
and fluttered everywhere;
the rarest of cards went flipping
and gave them all a scare.
And as the people scattered,
poor Casey turned up tales
and silence filled this card show
and ended all the sales.

From the dealers came a mumble
that roused up to a roar.
Then the auctioneer came over
and looked down on what they saw.
“Raise him! Raise him!” shouted
the newsmen from the back.
But no one would pick up Casey
as he lay by some wax packs.

Like some curse from the devil,
Casey’s origin was on display
and the owner’s face turned to horror
for there would be soon hell to pay;
so he signaled to a friend to sell
a Mantle rookie card,
but the words on Casey’s back would forever
leave him scarred.

“Reprint!” shouted everyone at once,
and the echo answered “Reprint!”
to all this now lonely bunch;
But baseball card collectors are not a discouraged race,
for now the plastic pages were turning
at a faster pace.
They passed up a Wagner and ignored
a perfect Cobb, just to find
again the mighty Casey card

The smiles soon vanished from the children’s lips
as they too joined in this game;
and I who viewed these mental flips
thought everyone there insane.
And now someone gave a TV pitch
in search of this cardboard gold,
asking everyone to even check their attics
as this story is being told.

Oh, somewhere Casey’s card is out there,
or so these dreamers think,
for they will stir up this hobby nation
until they find this missing link;
and somewhere I am laughing,
for I made up that baseball card,
and the refinding of poor Casey
will indeed be very hard.

This little cartoon from the 1960s tells the story of a baseball, appropriately named Abner, and his journey from the bottom of a ball bag to the halls of Cooperstown.  It’s a fun twist to think about the game from the ball’s perspective, and I almost felt sorry for little Abner at times.  (On the other hand, Abner does have a rather melodramatic “woe is me” sort of attitude about his situation, which also prompts a bit of snickering.)

I love how the cartoon spins a touch of reality into the saga, even if the details are a bit sketchy.  The Mickey Mantle caricature is particularly amusing, as he carries himself in a manner that I’ve never associated with the real Mantle.

This poem was published in 2017 through Poetry Soup.  I love how this piece captures the fun details of playing sandlot baseball.  Leave it to the parents to force the game to end in a tie.

Some walked, others biked
As we gathered at the park
There was Jimmy, Peewee
Ricky, Billy and Mark
Neighborhood boys
From blocks around, they’d descend
For the Sandlot World Series
It was friend against friend

After Tommy struck out
It was our turn to bat
We were cheering and yelling
Shaking our rally hats
Peewee lined a single
He was always big trouble
Then Steve, my brother
Lucked out with a double

It was second and third
With nobody out
When I stepped to the plate
Jimmy’s mom gave a shout
Then I heard my dad
Holler,”Time to eat”
The game ended in a tie
As none wanted to get beat.

This day in baseball: Mantle reaches 50

On September 18, 1956, the Yankees’ Mickey Mantle became just the eighth player in baseball history to hit 50 home runs in a season.  Mantle’s home run came in the top of the 11th inning off the White Sox’s Billy Pierce.  Whitey Ford and Bob Grim combined efforts to shut down Chicago in the bottom of the inning, thus sealing the American League pennant for the Yankees.