This day in baseball: Diggins debuts as the youngest player in professional baseball

On June 25, 1904, the Concord Marines of the Class B New England League brought their nine-year-old mascot into the game after the ejection of the team’s centerfielder and their second baseman becoming ill. Diggins thus became the youngest professional player in the history of the game. However, the youngster did not have an opportunity to field any balls playing right field, and he struck out in his only at-bat in the contest played at Alumni Field (also known as Spalding Park).

Diggins may not have had the opportunity to impress, but his appearance in the game did earn him a sparsely populated Baseball Reference page.

Oriole Park at Camden Yards, frequently referred to as just Camden Yards or Oriole Park, opened as the official home of the Baltimore Orioles on April 6, 1992. The stadium had been built to replace Memorial Stadium, a multipurpose stadium that had served as home not only to the Orioles, but throughout its life also hosted the minor league Bowie Baysox (1993), the Baltimore Colts of the National Football League (from the late-1940s to the early-1980s), the Baltimore Stallions of the Canadian Football League (1994-95), the Baltimore Ravens of the NFL (1996-97), and also served as the venue for various high school and college athletic events.

Oriole Park was built as a baseball-only facility in downtown Baltimore. When the city of Baltimore and the Maryland government refused to commit money to replace Memorial Stadium, the Baltimore Colts responded by moving to Indianapolis in 1984. Realizing that the city could also potentially lose the Orioles, city and state officials immediately began planning a new park in order to keep them in town.

Initially, the architectural firm Helmuth, Obata & Kassabaum (HOK) Sport Venue Event (now known as Populous) proposed a design similar to that of the new Comiskey Park. The Orioles turned down the proposal, however, in favor of a more retro-style stadium, wishing instead to follow in the footsteps of the great old ballparks like Fenway, Wrigley, and Ebbets. The new stadium would feature steel, rather than concrete trusses, an arched brick facade, a sun roof over the upper deck, an asymmetrical playing field, and natural grass turf. Construction of the new stadium began in 1989 and lasted 33 months, costing approximately $110 million.

The field itself is set sixteen feet below street level and is comprised of a sophisticated irrigation and drainage system below the grass turf. The purpose of this design is to reduce the frequency of rainouts by shortening the length of rain delays. The field’s system makes it possible to get the field ready for play within half-an-hour after the end of a heavy rain. An impressive feat of engineering, the drainage system can remove as much as 75,000 gallons of rainwater from the field in an hour.

The B&O warehouse that serves as a backdrop beyond the right field wall was a point of contention in the stadium’s design plan. Many people wanted the warehouse demolished, while others fought to leave it in place. Still others liked the idea of using the warehouse as the right-field wall instead of the backdrop. Perhaps it is fitting that the warehouse remains, given the name ultimately bestowed upon the new stadium, though it didn’t end up being the stadium’s right field wall — Eutaw Street separates the stadium from the warehouse, instead. The floors of the warehouse contain offices, service spaces, and a private club. The warehouse has never been hit by a legal home run during regulation play. However, several players have reportedly struck the wall during batting practice, and it was hit by Ken Griffey, Jr. during the Home Run Derby of the 1993 MLB All-Star Game.

Former Orioles owner Eli Jacobs favored naming the new venue Oriole Park. Meanwhile, Maryland Governor William Donald Schaefer preferred to name the stadium Camden Yards, after the former rail terminal at the site operated by the Baltimore & Ohio (B&O) Railroad. After considerable debate, a compromise was reached and it was decided that both names were to be used: Oriole Park at Camden Yards.

Following the 2000 season, the ballpark’s infield and outfield were completely rebuilt, and the drainage system was modernized to better protect both the pipes and the playing surface. Following the 2005 season, all new irrigation heads were installed, and in 2007, the warning track around the field was replaced. In 2008, the sod was replaced with a sand-based blend of Kentucky bluegrass to give the field a more vibrant green color. After the 2008 season, a new HD video display and scoreboard were installed below the right field bleachers. Before the start of the 2011 season, the seats in the lower seating bowl were replaced and several skyboxes were eliminated and refurbished to make room for more party suites and casual luxury boxes. The renovation reduced the park’s capacity from 48,876 to 45,971.

Notable events at Camden Yards over the years include the aforementioned hosting of the 1993 All-Star Game. On June 18, 1994, one of the stadium’s multiple-story escalators, overcrowded with fans heading to their upper-deck seats, jerked backward, throwing passengers to the bottom landing. The accident resulted in 43 people injured. On September 6, 1995, Camden Yards witnessed Cal Ripken, Jr.’s record-setting 2,131st consecutive game, and one year later, Eddie Murray blasted the 500th home run of his career at the ballpark.

In 2012, the park celebrated the twenty-year anniversary of its opening, launching the website CamdenYards20.com as part of that celebration. The site featured videos of Opening Day in 1992, a written history of the park and its improvements over the years, and photo galleries of Camden Yards, featuring everything from ballpark construction to celebrity visitors.

The success of Camden Yards sparked a trend in the construction of more traditional, fan-friendly ballparks in downtown locations across the U.S.  The park also ended a quarter-century trend of multipurpose stadiums in which baseball and football teams shared the same venue. Although intended to cut costs, the fundamentally different sizes and shapes of baseball and football fields ultimately made this concept inadequate for either sport. By the 2012 season, all but two MLB teams (the Toronto Blue Jays and Oakland Athletics) played in baseball-only parks.

This piece by Joyce Kessel was published in 2011 in Spitball Magazine. There’s a strong sense of nostalgia, especially in the language about attending minor league games.

I grew up a National League fan
of the Pirates, Cards, Reds & Giants,
not even knowing many decades before
my Buffalo Bisons played in the Senior League
well before becoming a minor league stalwart.
So I’d pray for sunny skies over Forbes Field
rather than Cleveland’s “Mistake by the Lake.”
My rare defection to the American League
came when the Orioles gained Frank Robinson
in that lopsided trade and after,
who couldn’t have appreciated Cal Ripken?

My dad & I would troll the minor leagues
where for some reason affiliations
didn’t seem to matter as much,
at least not to me,
who took in the green expanses
beyond dirt as the glowing diamonds
they were meant to be,
even in parks that were bare shadows
to Little League fields today.

In bandbox fields
and open air bleachers
we’d watch players with numbers,
but no names on their uniforms,
trading cards in their future or past
or not at all, their talents raw and wild.

At Schorling’s Park on Chicago’s south side, the minor league White Sox played their first game in franchise history on April 21, 1900. The Sox ended up losing the contest to Milwaukee, 5-4. The small wooden ballpark, located at 39th and Princeton, was also known as South Side Park, and would continue to be the home stadium for the team when they joined the American League the following season.

This day in baseball: The Clemens face off

In a minor league exhibition game held on February 27, 2006, 19-year-old Koby Clemens of the Lexington Legends of the South Atlantic League hit a home run off his 43-year-old father, Roger Clemens. In Koby’s next at bat, Roger threw a brushback pitch at Koby in retaliation. The father-son duo would later play another game together in 2006, as the elder Clemens was making his comeback with the Astros and pitched a game for Lexington. 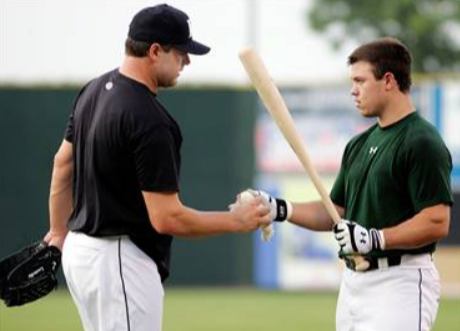 In case you missed it, yesterday, the minor league team Kansas City T-Bones announced they have changed their name to the Kansas City Monarchs. The name change comes as part of a partnership with the Negro Leagues Museum (also located in Kansas City).

This day in baseball: Birth of the Northwestern League

Considered the first minor league circuit in baseball history, the Northwestern League was organized in Rockford, Illinois on January 2, 1879. The organization included the Davenport Brown Stockings, Omaha Green Stockings, Dubuque Red Stockings, and Rockford White Stockings. Unfortunately, the stocking league became defunct before the season even came to an end as a result of lacking a fixed schedule and financial mismanagement.

Team standings and league leaders are listed in the charts below, courtesy of Baseball Reference:

I re-watched Bull Durham last night, and while I’ve made reference to the movie a number of times in this blog, I am a bit stunned that I have not yet devoted a post to it. I watched The Shawshank Redemption a few weeks ago, which got me thinking about the younger Tim Robbins’s performance in this classic baseball flick. It had been a while since I last watched Bull Durham, and it’s a bit stunning to see the younger Kevin Costner and Susan Sarandon, as well.

While the semi-pornographic nature of the film is a bit of a turnoff for some folks (pun intended), one can’t deny that this movie is chock full of some pretty fantastic baseball speeches. Some make one nostalgic about the game:

Others amuse the hell out of me:

Grand speeches aside, I also really enjoy the individual dialogues a lot of the characters have with themselves: Crash talking to himself at bat, Nuke talking to himself on the mound, and Annie’s narration over the entire movie. The film romanticizes the experience of minor league baseball a little too much, I think, but really, it’s just a fun film to take in as a baseball fan.

Dr. Gene Budig held a lot of titles over the course of his lifetime. He was a university president at Illinois State University, West Virginia University, and the University of Kansas (one building at KU, Budig Hall, is named in his honor). He was a newspaper executive, an author, a major general in the Air National Guard, and a senior presidential adviser for the College Board.

Gene Budig was also the last President of the American League in the MLB. He served in that role for six seasons, before the position was officially eliminated. In addition, for the last fourteen years, Budig was part-owner of Minor League Baseball’s Charleston RiverDogs, an affiliate of the New York Yankees. 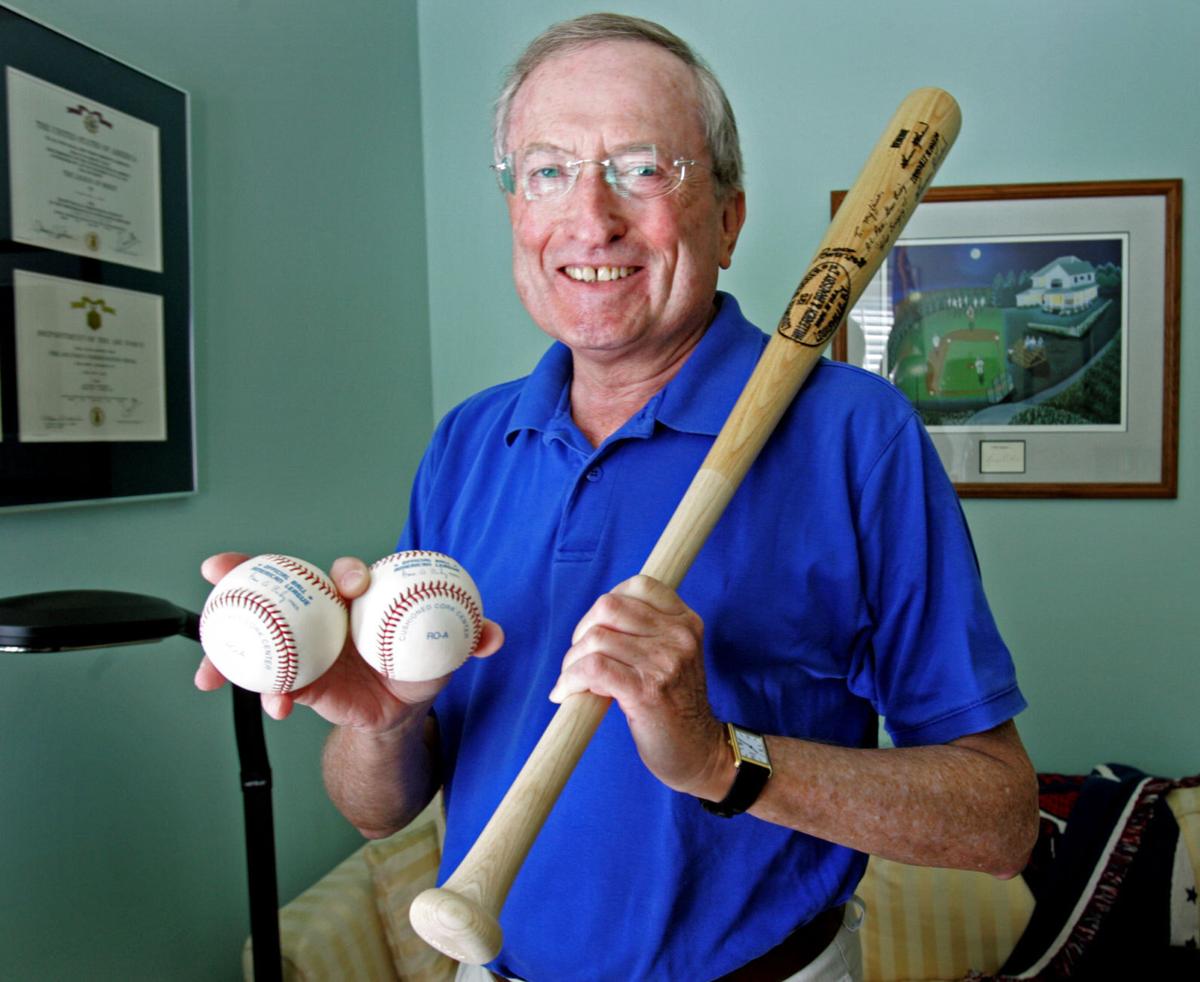