Now I don’t care how big a goof a man is, he’d ought to know better than get smart round a fella that’s slumped off in his battin’.

~Ring Lardner, “Where Do You Get That Noise?”

The only real happiness a ballplayer has is when he’s playing a ball game and accomplishes something he didn’t think he could do.

“You Know Me Al,” by Ring Lardner

Last week in baseball literature, we read Ring Lardner’s novel You Know Me Al.  This story was actually first written as a series of fictional letters published in the Saturday Evening Post beginning in 1914. 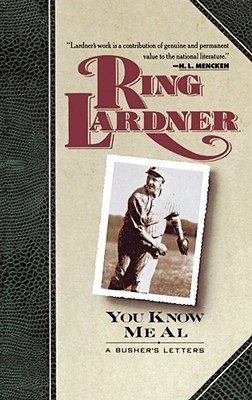 The letters are written by Jack Keefe, a ballplayer who, at the book’s start, has made it to the Major Leagues as a pitcher for the Chicago White Sox.  He writes home to his good friend Al Blanchard in Bedford, Indiana about his experiences.  As a reader, you pick up very quickly from the myriad of misspellings and usage issues that Jack is uneducated, gullible, and a bit of a rube.  It also doesn’t take long to realize that, in spite of this, Jack is rather full of himself.

Jack’s first round in the majors does not go very well, and he is quickly sent back to the minors.  In spite of his coaches insisting that he needs to learn to field his position and to hold baserunners, Jack stubbornly insists that he already knows how to do all that.  As the professor for my class points out, Jack is a thrower, rather than a pitcher.  At the end of the day, the only thing that seems to save his baseball career is his ability to throw a fastball.

Jack does make his way back to the White Sox organization, though it remains difficult to ever take him seriously as a ballplayer.  He has no respect for the likes of Ty Cobb or Walter Johnson.  He does manage to do well enough to boast of a 10-6 record at one point, although he insists that his six losses are the fault of his teammates while his ten wins are completely his own doing.  One of his coaches, Kid Gleason, tries, but fails miserably, to guide Jack, insisting that he work on his weak spots and that he take better care of himself physically.

Off the field, it seems that everybody goes out of their way to take advantage of Jack’s ignorance and gullibility.  Charles Comiskey continuously dupes him during contract negotiations.  His teammates trick him into picking up the tab during a night out.  He marries a girl named Florrie who becomes pregnant with what may or may not be his child.

In truth, I spent much of the book coping with a desire to punch every one of the characters in the story, including Jack himself.  Jack is unabashedly rude to everyone he interacts with, including those who are trying to help him.  He also proves that he is little more than a coward, often threatening to punch someone in the jaw, but never carrying out the deed.

It would be nice to be able to point to a fairy tale ending to this book, but with this set of personalities, I’m sure Lardner found such an ending impossible.  Rather, the story ends with Jack, after much waffling back and forth, taking off for Japan on an exhibition tour.  There is no true conclusion, the book simply ends.

In spite of my frustration with the characters, You Know Me Al nevertheless proved itself an enjoyable read.  I polished off the book over the course of a weekend, eager to find out what kinds of messes poor Jack would get himself into next.  It’s an easy read, and it’s not difficult to see why it was so popular even in its time.