Eight Men Out, by Eliot Asinof

I finished reading Eliot Asinof’s Eight Men Out this past week, the latest book assignment in my baseball literature class.  It proved itself an eye-opening book.  While I possessed a working familiarity with the Black Sox scandal of 1919, Eight Men Out goes into great detail regarding the various individuals involved in the scandal and how the whole thing might have gone down. 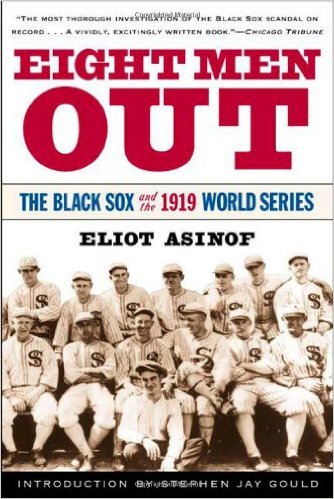 Charles Comiskey’s Chicago White Sox were already a divided team going into the 1919 season.  Half the team was uneducated, from relatively poor backgrounds, while the other half came from more affluent families, with the ability to afford the luxury of an education.  Thus the division in the team formed.

As a whole, the White Sox players did not get paid as they felt they should have been paid, as Comiskey was a notorious tightwad.  Granted, all baseball owners during this time did not give ballplayers their due, thanks to the reserve clause.  But considering that he owned what was arguably the best team in baseball, Comiskey was the worst offender of all.  He even went so far as to refuse to pay for the laundering of team uniforms.

According to Asinof, it was Chick Gandil, the White Sox first baseman, who first approached his gambling friend Sport Sullivan with the idea for the fix.  Thus the labyrinth of mistrust, ill intentions, and back-stabbing began, and it continued to grow as more players and more gamblers became involved in this get-rich-quick scheme that involved the manipulation of the American pastime’s championship series.  Asinof chronicles the games of the Series, describing sketchy plays and performances.  He also details what I can only presume are his perceptions on the thoughts of the players and gamblers involved, including the growing uneasiness of Joe Jackson and Buck Weaver, as well as the concerns of Eddie Cicotte and Chick Gandil that they would be double-crossed by the gamblers.  The White Sox lost the World Series five games to three to the Cincinnati Reds, and the players involved in the fix never received the full amount of money they had been promised.

In spite of the large number of people involved in the fix, and even in spite of an awareness by Kid Gleason (the White Sox manager) and Charles Comiskey himself that something was not quite right about the Series, nothing happened for almost a year.  Finally, however, in the wake of a fix between the Cubs and the Phillies, the 1919 World Series came into the national spotlight.

Signed confessions were given by Lefty Williams, Joe Jackson, and Eddie Cicotte.  The eight players involved in the fix — Williams, Jackson, Cicotte, Gandil, Swede Risberg, Happy Felsch, Fred McMullin, and Buck Weaver — were put on trial before a Grand Jury.  Interestingly, however, none of the gamblers were tried.  The players were found not guilty of conspiring to defraud the public.  In spite of this, the new Commissioner of Baseball, Judge Kenesaw Mountain Landis, banished all eight men from baseball for life. 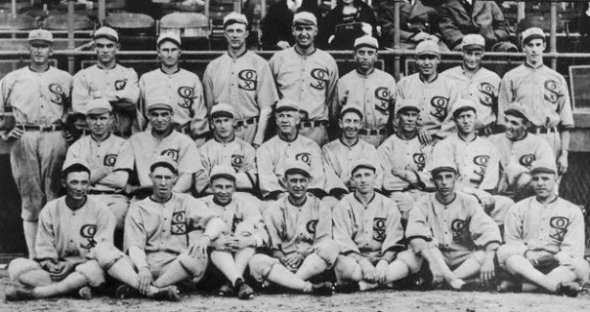 I thoroughly enjoyed Asinof’s account of the Black Sox scandal.  It is rich with detail and eloquently written, making it highly readable by the layman.  It reads more like a narrative than a history text — and really, I hesitate to use the word “history” with regards to this particular book.

One thing I learned in our discussions about the book is that not all the details included are necessarily accurate.  For example, Asinof describes a threat that was laid on pitcher Lefty Williams and his family if he did not carry out his part in the fix.  However, Asinof later admitted that he invented this particular anecdote as a way of being able to tell if anyone was using his material.  More importantly, Asinof does not cite his sources in the book.  There are no footnotes, no bibliography.  As I previously mentioned, his accounts of the thought processes of the players and gamblers appear to be largely speculation, as we cannot determine his sources for these descriptions.

In class, the professor challenged us to think about who is to blame for the 1919 World Series fix.  Charles Comiskey?  The players?  The gamblers?  The media?  But really, there is no hard and fast answer to this question.  While it does seem that Comiskey deserves the largest part of the burden, Asinof’s book clearly shows that there is nothing clear about this scandal.  Charles Comiskey was not the only team owner who underpaid his players, the gamblers and the players all knew the immorality of their conspiracy to throw the Series, and the media hesitated to break the story even when they suspected something was going on.  At the end of the day, the Black Sox scandal shows us that no one is immune to the temptations that easy money presents.  It is a tragedy, no doubt — a devastating blow to the game of baseball and to the American public.