Before Jackie Robinson made his mark by breaking Major League Baseball’s color barrier, he was a four-sport star at UCLA, playing baseball, football, basketball, and running track.  He remains the only four-letter athlete in the school’s history.  In his final year playing football for the school, Robinson led the Bruins in rushing (383 yards), passing (444 yards), total offense (827 yards), scoring (36 points), and punt return average (21 yards).  You can see a bit of footage from Robinson’s football days at UCLA here:

Robinson even went on to play a bit of semi-pro football.  In September 1941, he moved to Honolulu, Hawaii, where he played football for the semi-professional Honolulu Bears for $100 a game. His career with the Bears was cut short, however, when Robinson was drafted into the Army during World War II.

After World War II, Robinson briefly returned to football with the Los Angeles Bulldogs.  He then was offered a job as athletic director at Samuel Houston College in Austin, and as part of that role, he coached the basketball team for the 1944-1945 season.

It was in early 1945 that the Kansas City Monarchs offered Jackie a place on their team in the Negro Leagues.  Robinson then signed with the minor league Montreal Royals following the 1945 season.

The rest, as we know, is history. 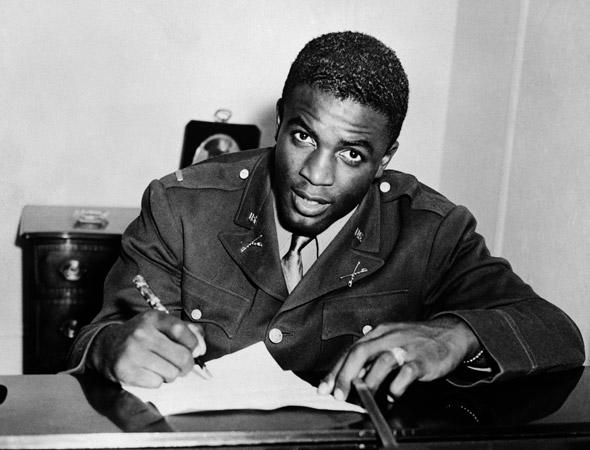