Three is a snowball

Growing up, my brothers and I used to do that thing that I think all kids do: hitting a snowball with a baseball bat just to see it explode. I don’t recall that we ever tried pitching a snowball, though. There would definitely have to be rules against iceballs and packing those damned rocks inside, for certain. 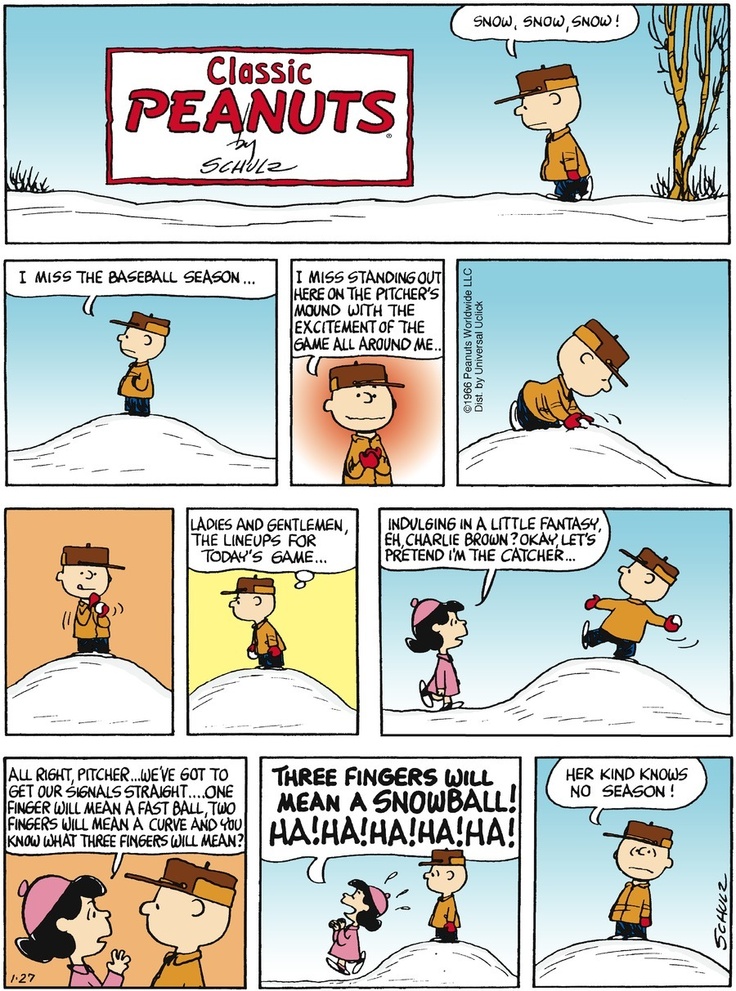 Anyone else ever feel this way? It’s not just me, right?

A hundred and twenty-three to nothing

I can understand this feeling completely.

Communication is key when asking someone to help you practice your fielding.

In addition to the “Charlie Brown’s All Stars!” episode featured on the DVD, the 50th Anniversary Deluxe Edition of Charlie Brown’s All Stars! also includes an “episode” consisting of a string of short clips.  Entitled “A Charlie Brown Celebration,” many of these clips revolve around the kids’ school experiences, and some around events outside of school.  One of these clips was about Peppermint Patty and Marcie having their own baseball-related adventure.

Peppermint Patty is untroubled by the lack of baseball caps for her team, but Marcie decides to take it upon herself to come up with the perfect cap for their team to wear.  While Peppermint Patty insists that winning is better than having caps, Marcie finds or creates a variety of different caps to present as possible team caps, ranging from the impractical to the downright ridiculous.

However, in a fit of conscience, Marcie decides that having team caps is not worth doing something unethical.  She leaves the stadium just as Peppermint Patty is climbing the wall out of the ballpark.  With no one to catch her coming down from the wall, Peppermint Patty lands on her head, and she declares that she is glad Marcie had changed her mind because repeating this process nine times likely would have killed her.

In my usual library browsings, I came across the DVD for Charlie Brown’s All Stars!  Given the number of Peanuts strips that revolve around baseball, of course I had to give it a watch.

The episode, which first aired in 1966, features Charlie Brown himself and revolves around his struggle to hold together a team that has lost faith in him.  I couldn’t help but feel sorry for Charlie Brown, as his own team rails on him throughout the episode, calling him a blockhead and constantly blaming him for their string of losses (never mind that they all stand around and stare while Charlie Brown himself chases down every fly ball).

Things come to a head when everyone on the team quits, and Charlie Brown is left without baseball.  He desperately begs his teammates to reconsider, but they continually turn him down until Linus tells him that Mr. Hennessy, the owner of the hardware store, is interested in sponsoring Charlie Brown’s team.  The sponsorship would include uniforms and the team would become part of an actual league.  With the promise of real baseball uniforms, the team agrees to return to playing.

Later, however, Mr. Hennessy calls Charlie Brown and informs hims that while he will be able to provide uniforms for the boys on the team, the league does not allow girls or dogs.  Therefore, Charlie Brown would have to let go of the girls on the team (including Lucy, Violet, Patty, and Frieda) and his dog (Snoopy).

This, of course, is a major blow to Charlie Brown.  However, with a game coming up, he decides not to tell the team about the uniforms, hoping that the promise of them will encourage them to play a great game and maybe even win.  If they win, the team might be so happy about the victory that they would forget about the uniforms.

The team does put on a great show in the game, playing perhaps the best they’d ever played.  However, they lose in the end when Charlie Brown’s attempt to steal home and tie the game in the last inning fails.  With the sting of such a close loss, Lucy and others tell Charlie Brown that if it were not for the uniforms and the league, they would quit. Charlie Brown then tells the team that he told Mr. Hennessy that the deal was off, but does not go into the details of why.  This causes the team to grown angry and storm off.

Linus ends up being the one to reveal to the girls and to Snoopy why the deal had been called off.  He points out that Charlie Brown was not willing to sacrifice his friends just to get uniforms, causing the girls and Snoopy to feel bad for how they had treated him.  In order to make up for this, they decide to make Charlie Brown a special manager’s uniform, but they decide to use Linus’s security blanket to do so.

The girls and Snoopy present the newly-made uniform to Charlie Brown, who, of course, is pleased with it.  He is determined that his team will win the next day, but the next day, it rains, so nobody else shows up to play ball. Charlie Brown stands alone in the rain on the pitcher’s mound, where Linus finds him and tells him that nobody will come to the field.  He then tells Charlie Brown that his uniform was made from his blanket.  Charlie Brown lets Linus hold the shirt-tail against his cheek and suck his thumb.

I loved this episode because it was Charlie Brown and his crew, and of course because it revolved around baseball.  However, I hated how Charlie Brown got treated from start to finish of the whole episode.  Yes, this treatment does seem to be par for the course for Charlie Brown, but really, can’t the guy get a break?

Poor Charlie Brown.  I think we can all sympathize. 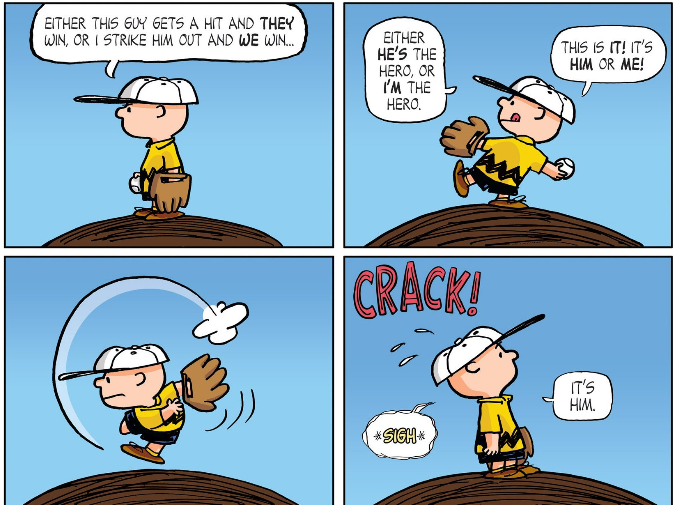 A little pro tip for outfielders. 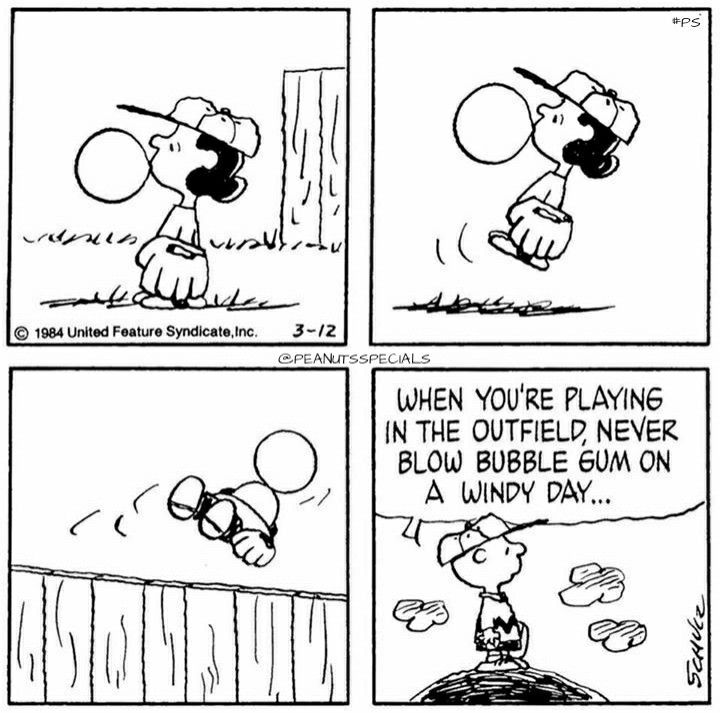 Charlie Brown is a terrible manager

It’s been a minute since I last posted a Peanuts strip.  Happy Friday, everyone! 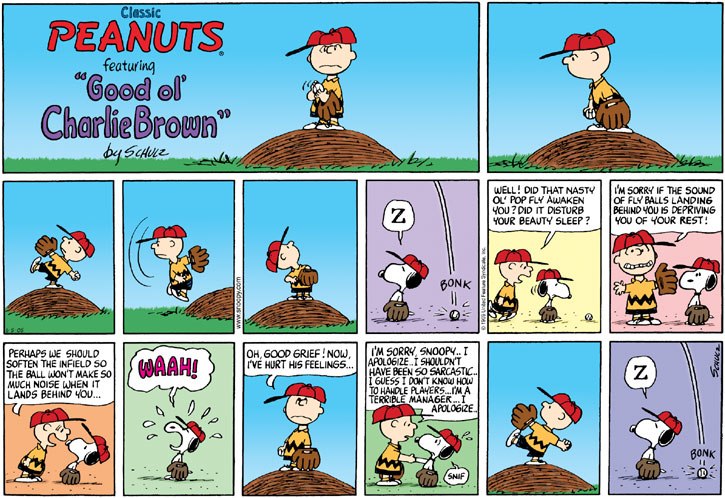