If you happen to be in Birmingham, Alabama today, here’s a cool way to spend your afternoon.

Rickwood Field, which turns 106 years old this season, is currently America’s oldest professional baseball stadium. After the Barons, now a Chicago White Sox AA affiliate, moved out of the stadium in 1987, it seemed the park was on the verge of being torn down.  However, in 1991, a group of young professionals joined forces to restore the ballpark, and then opened it to the public.

And today, the 21st annual Rickwood Classic will be played between the Birmingham Barons and the Chattanooga Lookouts.  The event will honor Rickwood Field Hall of Fame alumni, including Rollie Fingers, who pitched for the Birmingham A’s in 1967 and 1968.  The first pitch is scheduled for 12:30 p.m.

You can find more information about the story behind the field here: Birmingham Hosts a Baseball Game for the Ages, or on the Barons’ website.

Tickets for today’s game are also available on the Barons’ website. 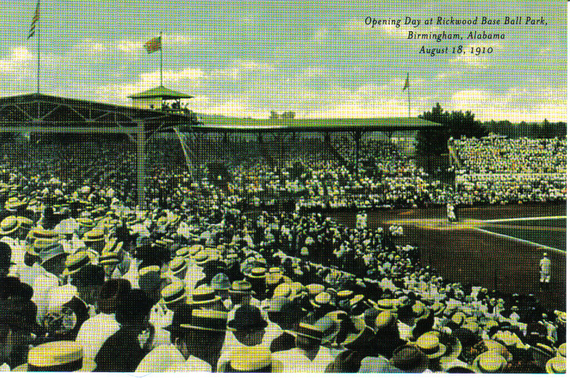 This day in baseball: Jackie Mitchell

At the age of seventeen, Chattanooga Lookouts pitcher Jackie Mitchell struck out both Babe Ruth and Lou Gehrig in an exhibition game on April 2, 1931.  After taking a ball, Ruth swung and missed at the next two pitches, and then Mitchell’s fourth pitch to Ruth was a called third strike.  Gehrig then swung through the first three pitches to strike out.

Mitchell was one of the first female pitchers in professional baseball history.  Shortly after the exhibition game, Commissioner Kenesaw Mountain Landis voided her contract and forbid the signing of women.

The girls of summer

“There’s no crying in baseball!”

Thanks to the 1992 comedy-drama, A League of Their Own, how many of us have not heard this classic line?  The movie dramatizes for us the story of the All-American Girls Professional Baseball League.  When World War II broke out, and many of the men in Major League baseball were called to away to serve, the prosperity of professional baseball was threatened.  In order to keep the sport alive (and to salvage some lost profits), baseball owners created the AAGPBL, scouted women players across the country, dressed them in skirts, and sent them out to play ball.

However, women’s involvement in baseball existed long before World War II.  In New York and New England, baseball was being played in women’s colleges as early as the mid-nineteenth century.  In 1867, Philadelphia played host to an African-American women’s team, the Dolly Vardens.  One great story you might have heard involves Jackie Mitchell of the Chattanooga Lookouts.  As a pitcher during an exhibition game in the 1930s, Mitchell struck out both Babe Ruth and Lou Gehrig.  Unfortunately, this event was quickly promoted as a mere publicity stunt, rather than a serious effort on the parts of Ruth and Gehrig.

Today, there persists a distinction between baseball as a male’s game and softball as a female’s game, but this separation did not exist until the 1890s when softball was invented.  For three decades prior to this, however, women played baseball, even as baseball leaders like Albert Spalding promoted it as a “manly” or “gentleman’s” game.  No doubt they looked ridiculous, as the uniforms of college women ballplayers consisted of baseball caps and full-length dresses, but women loved playing the game and they proved themselves to be just as competitive and physical as their male counterparts.  Unfortunately, society considered it too strenuous and unhealthy for women to engage in too much travel or competition, and as a result, women’s college baseball was confined to existing as an intramural sport, rather than an intercollegiate one.  As a result of the sexism of the period, from males and females alike, women’s attempts to establish themselves in baseball were doomed to failure.

As fans, however, the presence of women at baseball games was often encouraged.  It was believed that the presence of women would help to discourage the fighting and cat-calling that sometimes happened at the ballpark.  In the late-nineteenth century, Ladies’ Day promotions came into being, in an attempt to attract women fans to games.  By 1900, middle-class women were attending ballgames throughout the country.  In 1909, the National League, convinced that women had become sufficiently interested in the game to start paying for admission, brought an end to the Ladies’ Day promotion.

While the creation of the All-American Girls Professional Baseball League was certainly a breakthrough for women in the sport, baseball owners made it clear that the league was only temporary, and there was to be no question that those who played were women first and baseball players second.  From the short skirts and team names to the mandatory chaperones and strict rules on the women’s behavior, every measure was taken to reassure the public and the girls’ families that their femininity would remain intact.

The sport of softball continues to flourish today, but questions continue to circulate about its impact in perpetuating sexist stereotypes.  The common belief is that due to the physical differences between men and women, confining them to separate sports helps to maintain a fair playing field and protects women from needless injuries.  But when you think about it, baseball is a game that requires coordination, timing, knowledge of the game, control, and competitiveness — all characteristics that are not exclusively male.  Sure, perhaps strength and size can be useful assets, but even male players like Ichiro Suzuki have proven that they are not absolute essentials to being successful ballplayers.  And I know from personal experience that, out of the playing field, girls can be just as brutal and ruthless as the guys, if not more so.  After all, baseball is considered to be “America’s Pastime,” and as the AAGPBL Victory song points out, “we’re All-Americans” too.