The Royals revealed their City Connect uniforms a couple days ago, and I’ve gotta say, these fits are slick.

I’ve seen many of the other City Connect unis that have come out throughout the league, and for the most part, I’ve liked what I’ve seen. I haven’t hated any of the others, but in all honesty, these KC threads are the first uniforms that I’ve truly loved. And I am so stoked that it’s the Royals that get to sport them.

The Royals will be sporting these beautiful outfits this coming Saturday, when they take on the Yankees. Fingers crossed they can pull off a win that looks as good as they will.

My freshman year of high school, I played on the JV softball team. But whenever the JV team wasn’t playing, I was effectively the backup 2nd baseman for the varsity team. And while this meant I got to travel with the team for varsity tournaments, it also meant I rode the bench a lot for those games.

One game, we found ourselves without a scorekeeper. There were no parents willing to do it (or who knew how), and the JV coach was acting as 1st base coach for this varsity contest. Faced with limited options, the varsity coach called me over, sat me down with the scorebook, and gave me a crash course in scorekeeping. For the rest of the year, I also became the backup scorekeeper for the varsity team. From my sophomore year on, when I was a true member of the varsity squad, I became the backup scorekeeper for the JV team.

Equipped with this new know-how, I began keeping score whenever I’d listen to Royals games on the radio late at night in my room. My pencil-and-spiral-notebook system of scorekeeping was a much-simplified system compared to what I knew could be done in a true scorebook, but I still found it a great way to stay engaged with the ballgame.

My habit of keeping score for Royals games became sporadic, at best, after graduating high school, until the practice became virtually nonexistent. Today, however, I sat down with a notebook in the minutes prior to the start of the Royals-Mariners contest and I created that same, crude little table I used to make on those late nights as a teenager. I filled in the lineups for both teams, and as the game commenced, I tracked the results of each at-bat.

The ghost runner didn’t exist the last time I scored a game, so that was a new experience — I created the not-so-imaginative notation “GR” to note the ghost runner. I really thought I was going to have to start a new page when I used up the last player spot for Royals pinch hitters, but the conclusion of the game in the 12th sadly prevented that from becoming a necessity.

I’m pretty heartbroken that the Royals ended up losing in extra innings (and got swept by Seattle in the process). But I rediscovered how much I enjoy keeping score and the act of watching every at-bat with so much intent. I definitely need to reignite this practice as a habit, and hopefully it won’t take too long before I get to score a Royals ‘W’.

Jeremy Giambi wasn’t exactly a standout player in MLB. If anything, he generally seemed to be playing in the shadow of his older brother, Jason. However, Jeremy Giambi began his Major League career with the Kansas City Royals, just a few years after I first became a Royals fan and began to really pay attention to them, so the news of his death — especially at such a young age — caught my attention.

Besides the Royals, Giambi played with the Oakland A’s, Philadelphia Phillies, and Boston Red Sox during his 6-year MLB career. He finished his career with a .263 batting average, 52 home runs, and 209 RBIs. Giambi was also portrayed in the film and book versions of Moneyball.

Awful news to share: Jeremy Giambi, who played for six years in the major leagues, died today at 47, according to his agent, Joel Wolfe. Giambi played with his brother, Jason, in Oakland as well as in Kansas City, Philadelphia and Boston.

We are heartbroken to learn of the passing of a member of our Green and Gold family, Jeremy Giambi. We offer our condolences to Jeanne, Jason, and his family and friends. pic.twitter.com/sBSEyRb2z4

In August 1976, the Chicago White Sox wore shorts for three games. A friend shared this video with me, wondering if I had known this little tidbit, which I did not (learn something new every day!).

1976 marked the return of owner Bill Veeck, who had previously served as Sox owner from 1959-61. Keeping in line with his reputation as a promoter with wild ideas, on March 9, 1976, Veeck unveiled the new White Sox uniforms. They featured a long pullover top with a garish faux collar. But what really got people’s attentions were the shorts.

About the shorts, Veeck insisted, “They are not garish. Like my wife Mary Frances said, they have understated elegance. … Players should not worry about their vanity, but their comfort. If it’s 95 degrees out, an athlete should be glad to put on short pants and forget his bony knees. Hell, I’ve got a worse looking knee than any of my players. It’s solid wood.”

The shorts debuted on August 8th, in Game 1 of a doubleheader against the Royals at Comiskey Park.  The White Sox collected seven hits — all singles — and won the game 5-2. They switched back to regular pants for Game 2 of the doubleheader and lost 7-1. The shorts would not appear again until later that month, on August 21-22 against the Orioles. In total, the White Sox won 2 out of 3 games played in the shorts.

The video below shows footage from the game against the Royals, in which the shorts made their infamous debut.

Infographic: How much do Canadians love baseball?

This infographic baffles me in its sparseness. According to the Environics Analytics website, the graphic was created in light of the Toronto Blue Jays’ first playoff appearance in 22 years (going on to lose the 2015 ALCS to the Kansas City Royals). Compared to what appears to be less than 20% Canadian interest in the sport, a 2006 Gallup poll found that 47% of the U.S. public considers themselves to be baseball fans.

I haven’t been able to find a statistic revealing how many Canadians took the time to watch any of the 2015 playoffs, though attendance at the Rogers Centre was just under 50,000 for each of Games 3-5. Of course, Canadian attendance at Blue Jay games in 2020 was pretty much zero thanks to the pandemic and the Blue Jays getting kicked out of their own country for the season.

This documentary on the unstoppable Bo Jackson is a lot of fun to watch. Holy smokes, what an athlete.

MLB Opening Day was yesterday, and as hard as I tried, I just could not get excited about it.  The Royals play their opening game tonight, and while I feel a tiny bit happier about that, it’s still nothing like what I usually feel when Opening Day comes around.

I am making an effort, I really am.  From the time the announcement came down that a season was going to happen up to now, I have been trying to get excited about baseball.

Every time I think about Major League Baseball proceeding with a season, I find myself thinking, “Half those players are going to get COVID.”  “This season will be ended by early September.”  “It’s not like anyone can go to the games anyways.”  “It’s not about the game, it’s all about the money.”

Now, admittedly, bringing baseball back is not all bad.  It’s been weird not having new games to watch, even from the living room.  I miss the highlight reels, even the repetitive ones.  I miss having to confess to my co-workers, “Um, yeah… I fell asleep in the seventh inning, so I didn’t see that homer.”  I miss the bench-clearing brawls in all their glorious stupidity.  I miss seeing the perfectly cut grass of the myriad outfields and listening to the various broadcasters react to and analyze the games.  I miss baseball itself.

There’s also that ironic voice in my head reminding me, “At least the Royals can’t lose 100 games this year,” like they did last year and the year before that.

But even that can’t drown out the thought in my head that keeps insisting that going through with this season is stupid to the core.  The schedule is so short and compact, it’s almost laughable.  Then there’s the not-so-funny fact that all these players are at risk for exposure.

I will watch some games — it will be hard not to.  But it still won’t be the same. 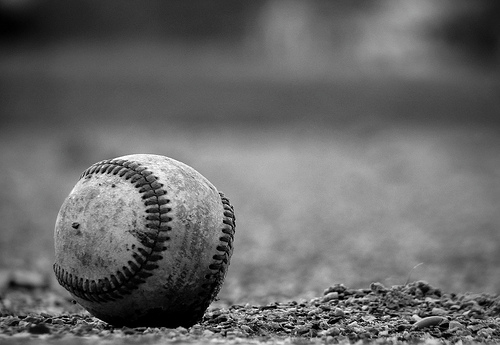 I am not too serious about anything. I believe you have to enjoy yourself to get the most out of your ability. I can take the criticism with the accolades. Neither affects me.

Unfortunately, I am not getting out of work today, but I am still joining in the collective sigh of relief and happiness that Opening Day has finally arrived!  And yes, the Royals-White Sox score will be up someplace where I can check in frequently.

This day in baseball: 1985 World Series comes to an end

Royals pitcher Bret Saberhagen threw a five-hitter to defeat the St. Louis Cardinals, 11-0, on October 27, 1985.  The victory came in Game 7 of the World Series, as the Royals won the Series, four games to three.