This Tier10 infographic on Mariano Rivera is awesome.  Not only are there a lot of details and statistics about the man himself, you will also find instructions on how to make a cardboard baseball glove.

Click on the image to get to a larger version of the graphic.

As many of you already are aware, The Sandman, Mariano Rivera, was inducted to the Baseball Hall of Fame a couple weekends ago.  I thoroughly enjoyed listening to his Hall of Fame induction speech.  What a humble guy.

A couple days ago, a baseball neophyte friend of mine asked me, “In baseball, what is a closer?”  And as I explained the concept, it occurred to me that I haven’t done one of these posts in awhile.

In baseball, a closing pitcher, more commonly referred to as a closer, is a relief pitcher who typically enters the game in the final inning.  Ideally, the closer’s team will be leading on the scoreboard at that point, and so the closer’s job is to “close” the game, getting the final outs of that final inning.

A closer’s effectiveness has traditionally been measured by the number of saves he earns.  A save is a statistic credited to a relief pitcher, as set forth in Rule 9.19 of the Official Rules of Major League Baseball.  The rule states that the official scorer shall credit a pitcher with a save when that pitcher meets all four of the following conditions:

Over time, closers have become one-inning specialists typically brought in at the beginning of the ninth inning in save situations.  They enter the game facing the high pressure that comes with having to seal those last three outs and, thus, a win for their club, which makes their role a rather essential one to a team’s success.

Congratulations to Mike Mussina, Edgar Martinez, Mariano Rivera, and Roy Halladay on their election to the Baseball Hall of Fame!  And bonus congrats to Rivera, the first ever elected with 100% of the vote. 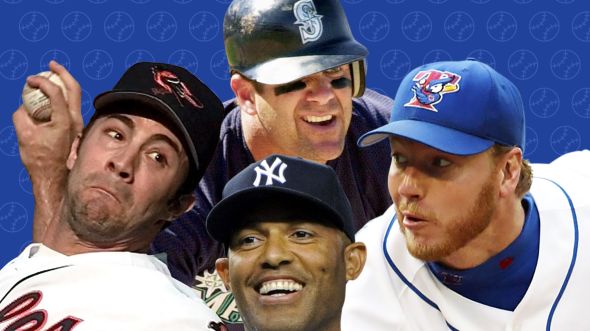 This day in baseball: The Sandman starts

Though he was usually used as a relief pitcher, on August 31, 1990, Mariano Rivera was given the start in a game on the final day of the season for the Gulf Coast Yankees.  The opportunity allowed him to throw enough innings to qualify for GCL’s ERA title, an accomplishment that carries a contractual bonus.  Rivera threw a seven-inning no-hitter against Bradenton to finish the season with a 0.17 ERA, 0.46 WHIP, 58 strikeouts in 52 innings, and $500 dollars richer.

Here’s a video from The New York Times I came across that describes what made Mariano Rivera such an effective closer.  The video is wonderfully concise, yet explains the mechanics of Rivera’s cutter in an easy-to-follow manner complete with some excellent graphics.

Infographic: The Age of the Yankees

I’m at an age where I’ve started noticing that many professional baseball players are younger than I am.  As a Royals fan, virtually the entire team that I root for is younger than I am, and I actually find myself surprised to notice when a player is older than me.

This infographic is a few years old, but it does present an interesting perspective that I’m sure we can all relate to as fans.

I see the hitter when he’s moved in the box, like when he’s moved closer to the plate or changed his stance. I see when the batter has moved his feet, and then I make my own adjustment.

This day in baseball: Picking up the pace

In an effort to speed up the pace of the game, in 1955, Major League Baseball announced a new rule that required a pitcher to deliver his pitch within 20 seconds of taking a pitching position.

By today’s rules, that time limit is down to twelve seconds: