On March 14, 1961, former Yankees president George Weiss agreed to become the first president of the expansion New York Mets. It is believed that the Mets offered Weiss a five-year deal at $100,000 annually, more than he ever earned during his 14 seasons with the Yankees.

One with the bat

I never really could understand the idea of becoming “one with the bat.”  Wouldn’t that hurt?

If T. S. Eliot had stayed in St Louis, he would never have held that April was the cruelest month. Well, unless he was a Browns fan.

Whether you are trick-or-treating, giving out candy, visiting haunted houses, going to a party, or just kicking back, please be safe!  Also, this picture makes me want a cookie.

In anticipation of the All-Star Game being played tonight, here’s a look at the scorecard from the very first All-Star Game played in 1933.  The American League won, 4-2, in Chicago. 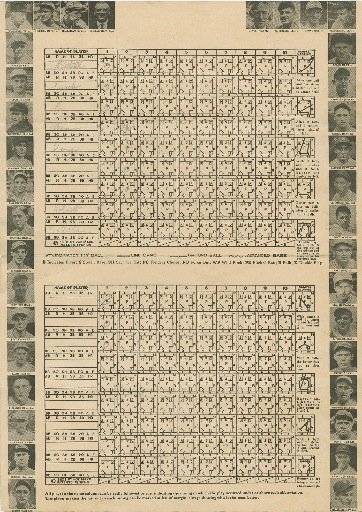 Two hours is about as long as any American can wait for the close of a baseball game, or anything else for that matter.

Because where would a lot of our favorite ballplayers be today without their moms?

And it is running under its own domain: archivedinnings.com

If you get the chance, you should stop in and check out the new header. It’s nothing super fancy, but I created it myself, and it’s not too shabby.

As you know, I have been considering the possibility of changing the name of this blog.  After reaching out to family, friends, and readers for ideas and giving it much thought of my own, I’ve decided that I am going to rechristen this site Archived Innings — a hint of baseball and a hint of history rolled into two words!

I am hoping to make the transition over the course of the next week.  I am putting the final touches on the new banner and looking into how to make the change to the domain name.  Hopefully things will all go smoothly!  Stay tuned for this exciting new phase!