To be fair, a strikeout at any level is rarely pretty — at least, if you’re the batter. This piece by Robert Harrison was published in January 2013.

With sadness I report
about the last ball
your son bought

It was flying fast
a white meteor
that he let pass

Clearly, this coach needs to re-evaluate their priorities.  You just never know when you might need to break out the home run trot, especially at the Little League level.  It’s best to stay prepared at all times.  Hopefully coach is at least allowing the team to practice the bat flip?  Because nothing teaches sportsmanship like perfecting the art of showing off.

I’m sure a lot of folks remember Mo’ne Davis, who, in 2014 became the first girl to pitch a shutout in the Little League World Series and was also the first African-American girl to play in the LLWS.  “Throw like a girl” memes exploded, except now, the phrase was a compliment.  Davis went on to be featured on the cover of Sports Illustrated,  she won the Best Breakthrough Athlete ESPY, and Time magazine named her one of The 25 Most Influential Teens of 2014, among other honors.

Fast forward six years, and it turns out that Mo’ne Davis is still playing ball.  This spring, Davis is a freshman at Hampton University, making her NCAA Division I softball debut on February 8, 2020.  She’s not pitching anymore, but rather has become a middle infielder.  In her debut, Davis started at second base and went 1-for-3 with a run scored and two RBIs.

As of this post, Davis has a .333 batting average with 8 RBIs and 5 stolen bases through nineteen games.

Davis’s decision to attend Hampton, an historically black school, comes in part due to the aftermath of her LLWS successes.  Following the tournament, Davis had the opportunity to meet President Barack Obama and First Lady Michelle Obama.  Then in 2015, she took a twenty-three-day Civil Rights barnstorming trip to the South with her Philadelphia youth baseball team, the Anderson Monarchs.  The team had the opportunity to travel in a 1947 black-and-white Flxible Clipper bus, the same type of vehicle Negro League players traveled in.  They also met with civil rights leader and Congressman John Lewis, who had marched with Martin Luther King Jr. in 1965.  After attending predominantly white schools from elementary through high schools, Davis decided to take the opportunity to follow in the footsteps of African-Americans who went before her.

On November 7, 1973, Sylvia Pressler, a hearing examiner for the New Jersey Civil Rights Division, made a ruling that ultimately resulted in the admittance of girls into Little League Baseball, making the Garden State the first to allow girls to play on Little League teams.  Prior to the decision, regulations had prohibited girls from participating with boys in the program.

He struck out three times and lost the game for the team when a ball went through his legs at third base. Parents were throwing things at our car and swearing at us as we left the parking lot. Gosh, I was proud. A chip off the old block.

~Bob Uecker, on a little league game in which his son, Bobby Jr., played 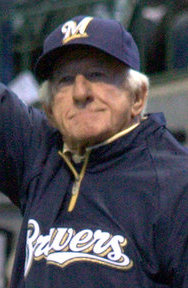 “The Boys of Bummer”

Slowly, but surely, I have been continuing my trek through The Simpsons, and I am up to the show’s eighteenth season.  In this season, the show highlights the ridiculous levels to which some fans take their obsession even with little league baseball.

The episode starts with Bart Simpson, shortstop for the Springfield Isotots (awesome little league name, by the way), catching a fly ball for the final out of a game, thus earning his team a spot in the championship game.  Proud mom Marge Simpson goes out the next day to buy a new dress to wear to the game, bragging to the sales lady about what a star her son is on the field.

The championship game brings a matchup of Springfield against Shelbyville, and Springfield find themselves leading 5-2 in the bottom of the ninth with two outs.  Shelbyville, however, has the bases loaded. When their batter hits the ball that could win or lose the game, it heads towards Bart. He drops an easily caught pop up and repeatedly fails to pick it up, kicking it around the field, allowing all four runners to score and giving Shelbyville the victory.

The entire crowd turns on Bart and starts throwing beer at him, but the humiliation doesn’t end there.  Bart’s error even makes it into the newspapers, and the town continues to rail on him for losing the game. Bart’s sister Lisa tries to cheer him up by taking to see an old baseball star (Joe La Boot) who dropped a critical fly ball once and still went on to be rich and famous. Unfortunately, it only makes Bart feel worse, even causing a rare burst of tears, after La Boot learns who he is and makes everyone in the building boo Bart yet again.

The next morning Springfield wakes up to find that a self-deprecatory Bart has spray-painted “I HATE BART SIMPSON” all over town.  The townspeople gather under the water tower, where Bart is found painting the message yet again.  Driven by taunts from the crowd, Bart lets go of the rope he dangles from, in an attempt to commit suicide.  La Boot, feeling remorseful, tries to catch him, but trips and misses.

Bart survives the fall, but ends up in the hospital.  Still unrelenting, the crowd now starts booing outside of Bart’s hospital window.  Finally, Marge snaps, and she storms outside to confront the crowd, telling them they should be ashamed of themselves for treating a child in such a cruel, abusive manner. Furthermore, she calls everybody hypocrites since they themselves probably had similar experiences when they were younger and haven’t gone on to accomplish anything of substance.

Finally, the crowd shows a bit of remorse.  Lisa suggests replaying the game (unofficially, but without Bart knowing) to give Bart another opportunity and to help bring his self-esteem back up, and the crowd agrees.  Bart is told the game is getting replayed due to the umpire using a non-regulation brush to clean the plate in the first attempt.  After 78 tries (with a variety of reasons made up as to why that final inning needed to be replayed), Bart finally catches the ball, “winning” the game.

Now and then, I find my entertainment through the web comic Cyanide & Happiness.  As a general rule, the comic can be a bit crude, crass, and definitely not for children, so if that’s not your cup of tea, I wouldn’t recommend exploring the comic any further beyond this post.

The last short the comic put out, however, is actually quite warm and sweet, so I have no issues sharing it here.  Absent dads can be hard on kids, but this Little Leaguer’s father finds a creative way to still play a role in his son’s baseball career.

Little League baseball is a very good thing because it keeps the parents off the streets.

Baseball in the Time of Cholera

I have been listening to a biography of Elon Musk on audiobook, and it certainly caught my attention when the audiobook mentioned that Musk had sponsored a documentary called Baseball in the Time of Cholera.  I don’t know whether Musk actually has any interest in baseball, but apparently he had visited the area of the cholera outbreak in Haiti, bringing with him gifts for an orphanage.  The documentary was made shortly after.

I managed to find the documentary on YouTube.  It’s only about half-an-hour long and certainly worth the watch.  The cholera outbreak in Haiti began in 2010, and from what I’ve been able to tell online, continued until May 2017.  I do have to caution, this documentary is a bit grim (the baseball helps to lighten things up slightly).  Nonetheless, things like this are important to be aware of in our world.

I came across this book while browsing the library yesterday.  Baseball, Boys, and Bad Words is a small book, and I found the title intriguing, so I decided to go ahead and check it out.  It would be a nice, fast, easy read, and it was about baseball.

The story takes place in 1970, when the author, Andy Andrews, was eleven years old.  He and his friends were returning for another season of Little League baseball.  This year, they were getting a new coach who was “new to the area.”  The new coach’s manner of speech at first confuses the boys, but then leads to some amusing moments throughout their season.  We hear about themes familiar to anyone who’s ever played Little League: the worst player is in right field, the coach’s son is automatically the pitcher, etc.

It’s a very short story, so I don’t think I can say much more about it without giving the whole thing away.  If it were typed in a straight text format, I can’t imagine this tale would take up more than a couple of pages.  Obviously the text is broken up to allow for conversion into book format.  Besides the story itself, the book is littered with a variety of pictures and baseball-related quotes, which, if you’re a regular reader of this blog, you would know is something I enjoy.

Though I enjoyed the story (I literally laughed out loud a couple times) as well as the quotes and the photography, if you are curious about this book, I would encourage you to look for it at the library.  It might make for a fun gift for a young ballplayer’s birthday, but outside of that, I honestly can’t say it’s worth the money you’d spend on it.  It might have been better published in a magazine or other periodical, to be read and enjoyed once, but not something truly worth taking up space on your bookshelves.