← Quote of the day
This day in baseball →

Browsing the young adult section of the library last week, I came across Super-Sized Slugger, by Cal Ripken, Jr. (with Kevin Cowherd).  I had a vague awareness that Ripken had broken onto the young adult author scene, though I never made a point to explore his novels.  Even though Ripken is, hands down, my favorite player of all time, a lot of my hesitation in checking out his novels has been due to the byline-plus-“With [actual writer]” line.  I imagine that even novels like these are written a la Players’ Tribune articles, in which the athlete gives an interview and has final approval, but does not actually do the writing.  That’s not to say that no athlete ever does any of his or her own writing ever, but it’s difficult to tell in these cases.

Coming face-to-face with a copy of this particular novel, however, I felt compelled to check it out and give it a read.  Super-Sized Slugger is actually the second book in the Cal Ripken, Jr.’s All Stars series, though it appears that each book is written to stand on its own.  To date, the series comprises of six books, the most recent of which was published this past March. 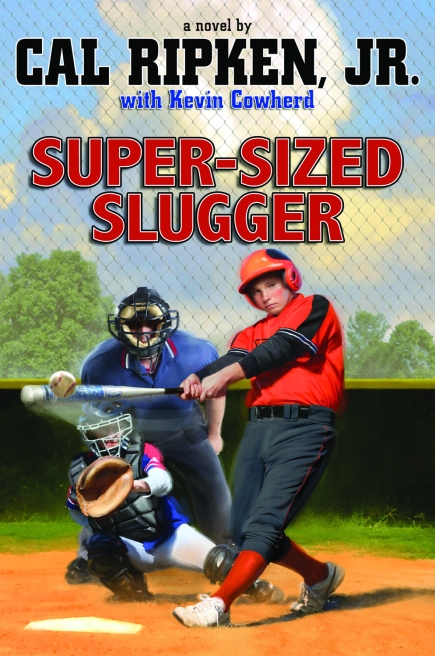 In Super-Sized Slugger, Cody Parker’s family has just moved from Milwaukee to Baltimore, where he tries out to play third base for the Orioles in the Babe Ruth League.  Even though he knows he plays a mean third base, he worries that his weight will prompt the coach to stick him in right field, and “[e]veryone knew … right field was for fat guys.  And slow guys.  And guys with thick glasses and big ears and bad haircuts” (3).  To compound his worries, the kid who started at third base the year before, Dante Rizzo, also happens to be the school bully, who warns Cody that he needs to find another position.

Nevertheless, Cody beats out Dante for the starting third base job, which incites Dante to terrorize Cody every opportunity he gets.  Meanwhile, a string of thefts sweeps through the school, and Cody’s life becomes more complicated when he finds himself the prime suspect in the crime wave.

The summary on the inside of the book jacket concludes with the query, “Will Cody ever succeed in getting people to see him for who he really is?”  Really, there aren’t a lot of surprises to be found in this novel.  For me to state that yes, Cody successfully resolves his issues with Dante, and that yes, the true culprit behind the thefts is uncovered in the end — it’s really not much of a spoiler.  The novel was written with an audience of eight-to-twelve-year-olds in mind, and the plot works very well for that age group.

That’s not to knock on the book, by any means.  Even if the plot proves predictable, I love the fact that this book, with a protagonist of such strong character, is out there for kids to read.  It’s also a well-written baseball book.  The influence of a former Major Leaguer’s input on the book shines throughout, and Ripken’s specific influence comes through in details about Baltimore and in the fact that Cody plays third base.  His knowledge of the position and the game as a whole makes it truly enjoyable to a fan of the game.  If all you’re looking for is a little bit of baseball mind candy, this book serves that purpose perfectly.