My freshman year of high school, I played on the JV softball team. But whenever the JV team wasn’t playing, I was effectively the backup 2nd baseman for the varsity team. And while this meant I got to travel with the team for varsity tournaments, it also meant I rode the bench a lot for those games.

One game, we found ourselves without a scorekeeper. There were no parents willing to do it (or who knew how), and the JV coach was acting as 1st base coach for this varsity contest. Faced with limited options, the varsity coach called me over, sat me down with the scorebook, and gave me a crash course in scorekeeping. For the rest of the year, I also became the backup scorekeeper for the varsity team. From my sophomore year on, when I was a true member of the varsity squad, I became the backup scorekeeper for the JV team.

Equipped with this new know-how, I began keeping score whenever I’d listen to Royals games on the radio late at night in my room. My pencil-and-spiral-notebook system of scorekeeping was a much-simplified system compared to what I knew could be done in a true scorebook, but I still found it a great way to stay engaged with the ballgame.

My habit of keeping score for Royals games became sporadic, at best, after graduating high school, until the practice became virtually nonexistent. Today, however, I sat down with a notebook in the minutes prior to the start of the Royals-Mariners contest and I created that same, crude little table I used to make on those late nights as a teenager. I filled in the lineups for both teams, and as the game commenced, I tracked the results of each at-bat.

The ghost runner didn’t exist the last time I scored a game, so that was a new experience — I created the not-so-imaginative notation “GR” to note the ghost runner. I really thought I was going to have to start a new page when I used up the last player spot for Royals pinch hitters, but the conclusion of the game in the 12th sadly prevented that from becoming a necessity.

I’m pretty heartbroken that the Royals ended up losing in extra innings (and got swept by Seattle in the process). But I rediscovered how much I enjoy keeping score and the act of watching every at-bat with so much intent. I definitely need to reignite this practice as a habit, and hopefully it won’t take too long before I get to score a Royals ‘W’.

Personally, I don’t like the term ‘success.’ It’s too arbitrary and too relative a thing. It’s usually someone else’s definition, not yours.

I enjoyed watching Edgar Martinez play while growing up.  I would say that watching and hearing about Edgar was how I truly came to understand what a designated hitter was.

With just three more wins needed to reach 300 total for his career, 43-year-old Gaylord Perry signed a one-year contract with the Seattle Mariners on March 5, 1982. Perry then earned his 300th win that May when he went the distance to beat New York at the Kingdome, 7-3.

Ken Griffey, Jr. and Mike Piazza were inducted into the Baseball Hall of Fame a couple weeks ago.  Griffey was elected into the Hall earning a record-setting 99.32% of the votes.  His speech is long and emotional, but certainly worth a watch.

You don’t see a lot of hip hop songs about baseball, but this one by Macklemore and Ryan Lewis is pretty good.  This elegy for legendary Mariners broadcaster Dave Niehaus was performed at Safeco Field after Niehaus’ death in 2010.

Major League Baseball hasn’t always started seasons in March.  In fact, the first time a Major League season did so was on March 31, 1996 in Seattle.  The Mariners beat the White Sox 3-2 in twelve innings at the Kingdome.

I can do that (foul off pitches) intentionally. They were borderline. And I was trying to get the pitcher to make a mistake.

It was a totally different feeling. I was excited. I was nervous all in one. The closest thing that compares is when I was a little kid and my mom would take me to Toys ‘R’ Us when you can pick out anything you want. I was like a little kid in a candy store. It was awesome.

~Cleveland Indians’ pitcher, C.C. Sabathia, after he won a playoff game against the Seattle Mariners 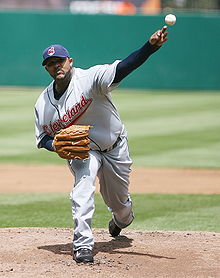