← This day in baseball
Quote of the day →

“I’ll bet I know why you’re standing there,” commented my boss this past Monday morning, as I stood in the doorway of her office.

I had to grin at this.  “I’m pretty sure you probably do.”

“You want tomorrow off so that you can go to the parade,” she stated matter-of-factly.  Which, of course, was completely accurate.  If it takes the Royals another thirty years to win their next World Series (fingers crossed that it doesn’t!), then this could very well be my best chance to attend one of these celebrations.  My request was granted on two conditions: clear my calendar of all Tuesday meetings and appointments, and, of course, take lots of pictures.  Ironically, clearing my calendar proved the more easily completed task of the two.

I rode out to Kansas City with one of my co-workers, also a big Royals fan who received permission to take the day off on the same conditions.  I mentioned to her that I had heard estimates on the radio that a crowd of about 200,000 was expected to attend the celebration, so we knew to expect a good-sized crowd.  We arrived in the city relatively early, meaning nine a.m., and downtown already had transformed into a sea of blue and white shirts and jerseys.

First thing after we found a place to park, I requested that we find a place to stop and use the restroom.  Besides needing the stop after the hour-long car ride, I also knew it might be our last chance for a while.  Once we found a spot to wait for the parade, we would want to stay put so as not to lose it.  As it turned out, taking care of it early was the best idea I had all day, as the line to the restroom in Crown Center extended out the door and tailed into the food court.  Fortunately, everyone who stood in line knew we were all in the same boat and remained courteous and patient with one another, which made the wait relatively pacific.

In front of Crown Center, the fountain was dyed blue in celebration: 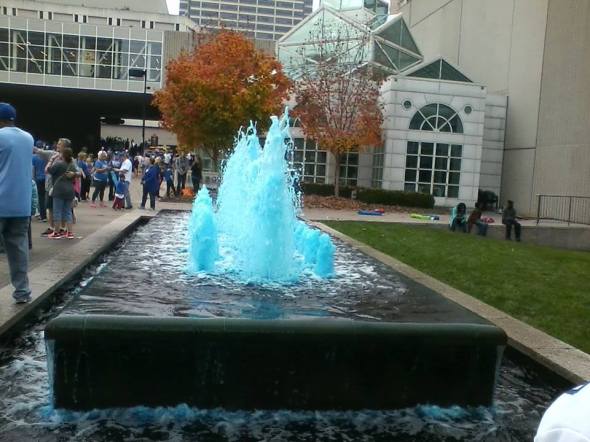 We walked around a bit, seeking a spot to claim as our own.  Various stands had been set up along the streets, selling World Series merchandise at exorbitant prices.  Chants of “Let’s go, Royals!” broke out at random intervals, sometimes with greater enthusiasm than others.  Kids in Eric Hosmer and Salvador Pérez jerseys blew into long plastic horns, which I could only guess their parents bought for them somewhere in the area.  All of downtown Kansas City had come alive with excited chatter. 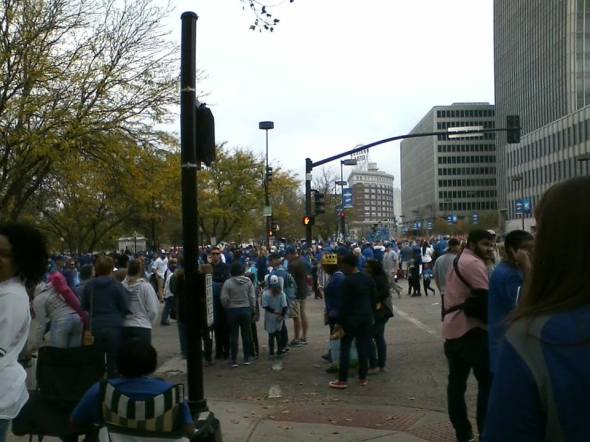 We found ourselves a spot along Pershing Road, a couple blocks from Union Station.  We planned to watch the parade go by, and then to make our way to Union Station for the rally.  Several people were already standing or sitting in lawn chairs along the parade route in front of us, and some looked like they may have even camped out overnight.  It wasn’t much later than ten o’ clock at this point, which meant that we had two hours before the parade even started, and an estimated hour-and-a-half beyond that before the procession reached us.  We passed the time people-watching, and I ate my way through half a box of Cheez-its, mostly out of a need to do something with my hands.  I finally had to give up on the Cheez-its, however, when I realized that they were creating a gnawing feeling in my stomach that was only growing worse.  I should’ve brought something with protein in it, I realized.

Our position was as good a spot as we could have gotten, considering when we got there and how many people had already camped out ahead of us, and I thought we might still have a decent view of the parade.  Once the procession finally approached us, however, I realized that my prediction wasn’t entirely accurate.  The people in front of us seemed to grow in height once the parade started passing in front of us.  Not only that, those with small children (understandably) hoisted their kids onto their shoulders so that they might see the parade.  This left all five-feet-three-inches of me standing on my tiptoes and craning my neck in every possible direction to try to get a glimpse of what was going on.

The parade was led off by a giant replica of the World Series trophy (it’s hard to pick out, but it is dead center in this picture): 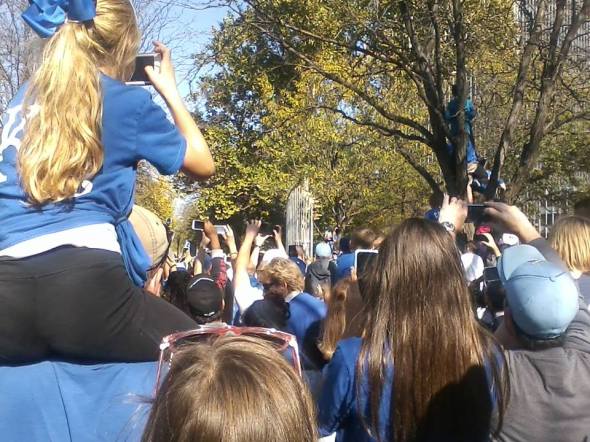 Throughout the parade, there was also a collection of these giant, inflatable baseballs (I kind of want one for myself): 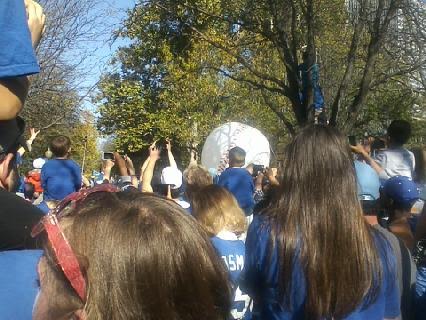 And Dave Webster, the man who hoists the now-customary ‘W’ after each Royals’ home victory, also made an appearance: 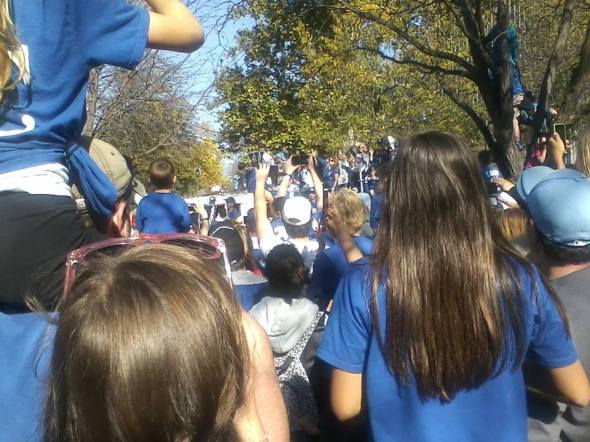 I also caught sight of several players, including Eric Hosmer, Mike Moustakas, Lorenzo Cain, and Salvador Pérez, as well as David Glass, Dayton Moore, and Ned Yost.  Unfortunately, I was far away enough that looking at my pictures now and trying to decipher their figures through the forest of spectators, I honestly cannot tell who is who anymore.  It doesn’t help that the players were all wearing the same black hoodie.  The hoodies had “Thank you Kansas City” printed on them, which was certainly a wonderful gesture, so I’m not saying it was a bad idea.  It just makes it more difficult to distinguish the players from a distance.  Nevertheless, here are a couple shots that I managed: 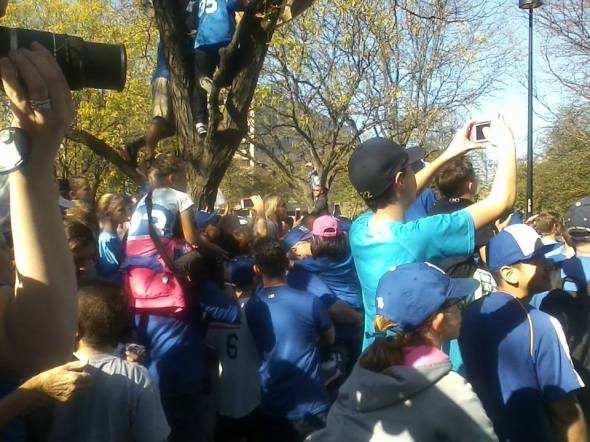 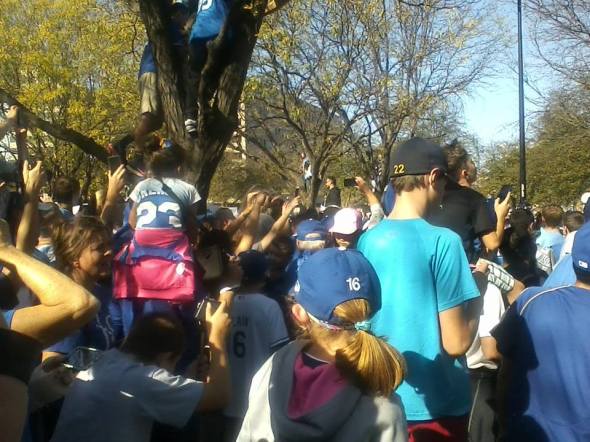 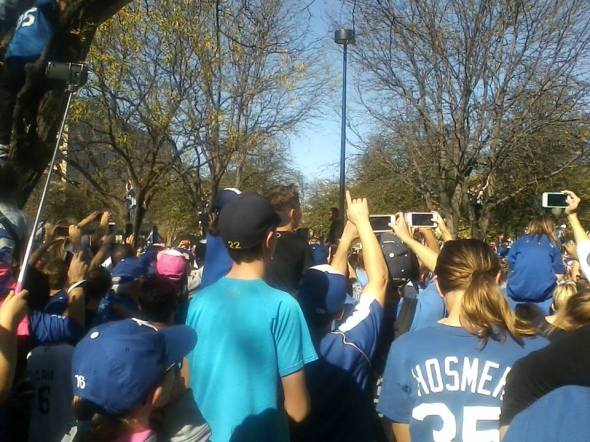 While we were there, we could tell that there was no way that a mere 200,000 people had come out for the parade.  The way we were packed in just in our immediate vicinity, I estimated approximately 50,000 right there, and if things were just as crowded along the entire route, then the attendance for the show exceeded 200K easily.  I estimated the number at 500,000, but when I saw the number 800,000 that night, even I was blown away.  The headlines about the turnout seemed just as surprised:

And pictures like this one were actually kind of awe-inspiring: 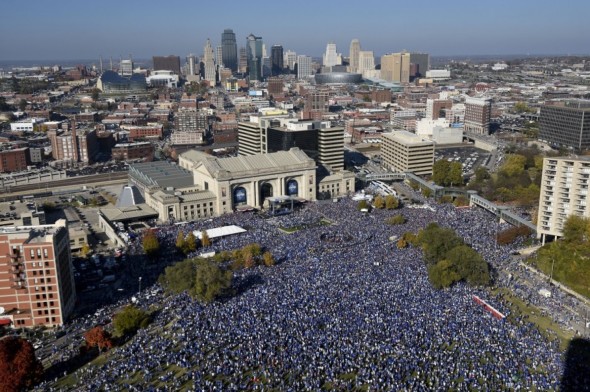 While we were there, I discovered that even though I could receive text messages, I couldn’t send any.  Most folks were unable to access websites or other features on their phones because the signals was so jammed. We initially tried to follow through with our plans to attend the rally after the parade, but as we approached Union Station, we quickly hit a wall of people that would have been near-impossible to get through.  Somewhat reluctantly, we decided to turn around and head home.

I’ve been to some big gatherings before, ballgames and rock concerts mostly, but never anything like this.  It’s actually been pretty fun to tell people, “Yeah, I was there.  It was crazy!”  And totally worth the experience.